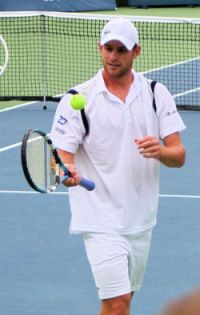 New York: American veteran Andy Roddick has said he will retire after the US Open.

“Walking off at Wimbledon, I felt like I knew,” Roddick said Thursday, on his 30th birthday, reports Xinhua.

“I couldn’t imagine myself being there another year. I don’t know if I’m healthy enough or committed enough to continue another year.”

Roddick dropped out of the top 10 in the rankings earlier, a spot where he was a mainstay throughout his career. He entered the U.S. Open as the 22nd seed, the second-highest American.

“I didn’t want to disrespect the game by coasting home. I wanted an opportunity to say good bye.” Roddick said.

“For 13-14 years, I have fully invested in tennis. I have been pretty good about keeping my nose to the grindstone. I feel like I’ve won a lot of matches by being consistent.”

Roddick has 32 ATP World Tour titles including two this season. His biggest win came in 2003 when he won the U.S. Open.

He has four doubles titles too. He reached World No. 1 for the first time in November 2003, becoming the youngest American (21) to do so.

Roddick also has 33 Davis Cup victories, second in U.S. Davis Cup history. He also led the country to the title in 2007.

The announcement comes just a day after four-time Grand Slam champion Kim Clijsters retired from singles competition. She lost in the second round to British Laura Robson.

Roddick is scheduled to play Friday night against Bernard Tomic in the men’s singles second round.