Dehradun/Jammu/Manali/New Delhi: Twelve people have died, nearly 40 are missing and hundreds are trapped after torrential rain led to flash floods, cloud bursts and landslides in sub-Himalayan Uttarakhand, Jammu and Himachal Pradesh, officials said Sunday. The incessant rain is likely to continue, the met office reported.
Rescue operations are in full swing in Uttarakhand and Jammu. 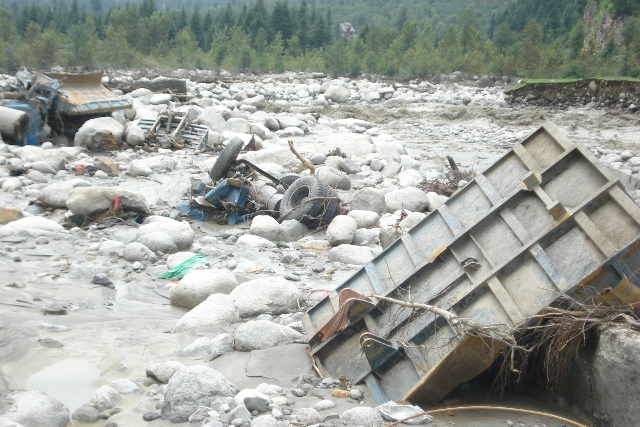 While 12 people have died in Uttarakhand due to flash floods and landslides, officials said, hundreds were left stranded in various places in Jammu where the rains caused landslides.

In Himachal, an alert has been sounded after flash floods triggered by the rising water level of Beas river, hit upper Manali. People living close to the river on the Manali-Rohtang road have been asked to move to safer places.

In Uttarakhand, Garhwal, Chamoli and Uttarkashi districts are worst-affected.

Personnel of the Indo-Tibetan Border Police (ITBP), police and army are searching for 19 labourers who went missing at a hydel project in Assi Ganga in Uttarkashi, about 180 km from here, late Saturday, officials said.

Officials told IANS that as many as 40 people were missing across the state.

The water levels in Bhagirathi, Alkananda and Yamuna rivers are running at danger levels, officials said.

Met officials in New Delhi said incessant rains would continue in both the regions for another day.

“We had given a timely warning to the state agencies so that evacuation could start in villages and remote districts. Rains will continue for the next 24 hours,” an official from India Meteorological Department (IMD) said.

There were about half a dozen landslides on the 300-km Jammu-Srinagar National Highway, considered a lifeline to the Kashmir valley.

Highways connecting the mountainous districts of Poonch and Rajouri in northwest Jammu and Doda and Kishtwar in the northeast also reported similar landslides.

In the Jammu region of Jammu and Kashmir, over a dozen people were rescued from Samba district where the Basantar river flooded its banks.

National Disaster Management Authority (NDMA), headquartered in New Delhi, has not yet sent any rescue team to Uttarakhand since the state government assured it of having enough manpower for rescue and relief.

“We have a 45-member team ready, but the Uttarakhand government has said they have enough ITBP personnel to take care of the situation,” K.M. Singh, an NDMA member said.

“We are in constant touch with the government. If they want any help, we would immediately send our team,” he said.

“The downpour has slowed. But we are still working on restoring communication lines and helping victims in pilgrimage areas,” said an official from the emergency control room in Chamoli.

The yatra to Gangotri, Yamunotri, Badrinath and Kedarnath has been halted due to landslides and washing away of roads, said officials.

In Himachal, the Beas river’s course has changed at several places between Kanchnikoot and Nehru Kund.

Manali Sub-divisional Magistrate Balbir Thakur Sunday said the administration had sounded an alert, cautioning people living in the vicinity of the river to move to safer places.