New Delhi: The move by the Congress leadership to appoint Virbhadra Singh as the Himachal Pradesh Congress chief, three months ahead of the assembly elections, has come as a relief for party workers wary of uncertainty and confusion following protracted discussions on a change in leadership over the past few days. 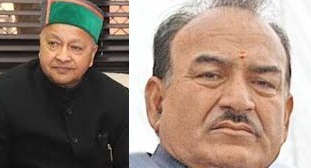 Party sources said that the central leadership had been going back and forth over the past few weeks on making changes in the state unit mainly to placate Virbhadra Singh, 78, who wanted a bigger say in ticket distribution to party candidates in the polls and had been unhappy over the composition of some poll-related panels.

Himachal Pradesh and Gujarat, both ruled by the Bharatiya Janata Party (BJP), will elect new assemblies polls by December and the Congress can ill-afford to lose both the states to its main adversary at the centre.

Sources said the central leadership had been talking to Virbhadra Singh, a five-time chief minister, to address his grievances and ensure his whole-hearted participation in thr elections but assurances to him had not had the desired impact and formulae worked out had been difficult to implement due to varying factors.

The initial move by the central leadership to appoint a working president, mainly to satisfy Virbhadra Singh, ran into rough weather as his supporters demanded that their leader should be the appointed state unit chief instead of the incumbent, Kaul Singh.

Party sources said after days of discussion and despite a section of state leaders pointing to corruption allegations against Virbhadra Singh, the leadership made up its mind to appoint him as the state unit chief. They said a formal announcement was expected soon.

They said a section of leaders from Virbhadra Singh’s rival camp told the central leadership that Kaul Singh, who had led the party in the state for the past few years, should be suitably accommodated as his removal would send a wrong signal to his supporters.

The sources said discussions were held in party circles on appointing Kaul Singh as the leader of legislature party instead of Vidya Stokes but a decision had not been finalised.

Party leaders said uncertainty over state unit leadership had affected the party’s poll preparations as most leaders were camping in Delhi along with their loyalists for the past few days.

“We have lost so much ground in the state over the past few days that it will be difficult to retrieve. The workers were feeling demoralised and wanted the confusion to end,” a party leader opined.

Some leaders even expressed apprehension that Himachal Pradesh could go the same way as Punjab for the Congress.

In Punjab assembly polls held earlier this year, the Congress lost to the Shiromani Akali Dal-BJP combine despite expectations that it will win riding on anti-incumbency factor.

Like Punjab, Himachal Pradesh has had a long tradition of not returning to power a ruling party.

The impasse over state Congress leadership also, apparently, forced the Congress to defer its Aug 27 protest outside Himachal Pradesh assembly during its last session before the polls. Officially, though, the party cited “rains” as the reason for putting off the protest.

Congress sources said that the party wanted to placate “sulking” Virbhadra Singh as the assembly polls in the hill state, expected in November, were crucial.

The septuagenarian is seen in the party circles as a fighter and a mass-leader of the state who has the ability to pull crowds.

A party leader said that Congress was in a better position to win in Himachal Pradesh than Gujarat and was trying hard for the right formula.

“If we fail to win either of the two states, the message will not be positive among allies and will add momentum to BJP’s campaign against the (UPA) government,” the leader said.