Shimla: Disrupting question hour, the congress today staged a walkout early in the dayâ€™s session as speaker Tulsi Ram refused to take up an adjournment motion that the opposition had moved over youth congress workers being beaten in a police lathi charge, last Friday. 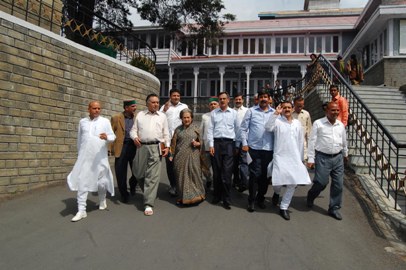 After the weekend break, as the house convened to take up the days question hour, Vidya Stokes, the leader of the opposition was on her feet demanding that the adjournment motion moved by three congressmen including herself be taken up after suspending the question hour.

She said that a peaceful demonstration of youth congress workers had been subjected to a unprovoked cane charge by the police on Friday and the matter demanded an explanation from the government.

The speaker in his ruling said that as the adjournment motion was only submitted in the morning and not on the day the incident took place, the discussion could take place after giving due time to the government for replying to the matter.

Intervening in the matter Jagat Prakash Nadda, the parliamentary affairs minister said that the government was not shirking from discussing the matter but asked the opposition to not disrupt the question hour.

However the opposition refused to relent and started shouting slogans against the chief minister and the SP Shimla. With the opposition benches emptied, Nadda said that they were not serious about discussing important issues confronting the state but were resorting to gimmicks by staging walkouts.

Later talking to the media Stokes alleged that a congress complaint against police officials which included the SP, ASP and an SHO for filing of an FIR has not been taken cognisance of as they were responsible for unleashing the lathi charge on a peaceful demonstration.

The opposition leader also said that despite several people getting injured, police had not registered any FIR, even though it had got a medical of 6 people done. â€œThe whole incident smacks of a conspiracy as we were part of the demonstration on Friday but as we were allowed through the police cordon, others holding a peaceful protest were beaten up,â€ said Stokes.