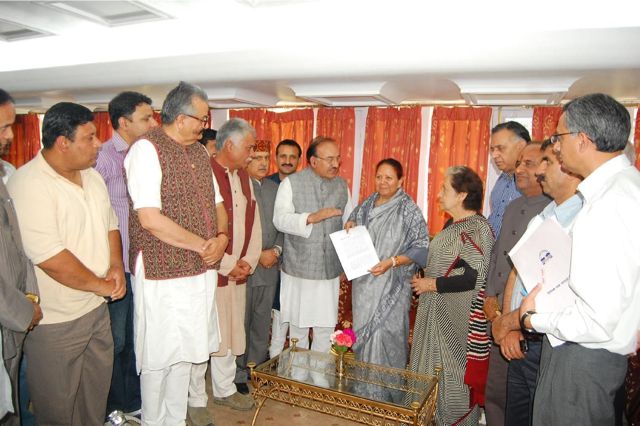 Shimla: On the last day of the budget session, Congress again staged a walkout early today and did not participate even in the question hour over as the discussion sought under an adjournment motion about a lathi-charge on party workers being changed into one under another rule left the opposition members infuriated.

As the house convened to hold the question hour, opposition leader Vidya Stokes was on her feet demanding a discussion on the adjournment motion and an explanation as why the debate sought had been moved to one under Rule 62, without taking them into consideration.

With the chair refusing to relent, the opposition members were up on their seats and trooped out of the house shouting anti-government slogans.

Chief minister Prem Kumar Dhumal rose and condemned the oppositionâ€™s attitude in disregarding the chairâ€™s ruling. He said that it was the internal squabbles of congress that had affected the functioning of the house. He also said that frequent walkout only showed how serious the opposition was about discussing important issues confronting the state.

Terming the opposition leadership as directionless, he said that avoiding the house only showed that they were incapable of meaningful debate.

Meanwhile, having walked out of the assembly, congress legislators drove down to the governorâ€™ Urmila Singh’s office and submitted a memorandum demanding a judicial probe into the lathi-charge on 9th April on party workers.

The congress leaders also asked the governor to seek a CBI probe into the three CDs involving Virender Kashyap, a BJP and the chief minister.

Later talking to the media, senior congress leader Stokes said that since the government was not willing to listen to the opposition and was bent upon silencing their voice they had no choice but to approach the governorâ€™s office to demand a judicial probe into an lathi charge on a peaceful protest by party workers.

The peaceful protest was organised against the governments polices of increasing taxes, bus fare hike, increasing water charges at a time when there was water scarcity, increasing electricity charges, corruption and deteriorating law and order conditions, said the opposition leader.

She said that it was as if by design that protesting congress workers who were on the verge of dispersing after having held a demonstration that they were beaten by batons. â€œOnly a day earlier the CPI(M) had protested and held up traffic at various places for over 4 hours but police took no action, whereas a peaceful congress protest was brutally beaten up, she said.

State congress president Kaul Singh who was also present on the occasion said that a CBI probe had been sought into the CD issue as the government was bent upon hushing up the matter and was applying a different yardstick with a CD involving senior congress leader Virbhadra Singh.