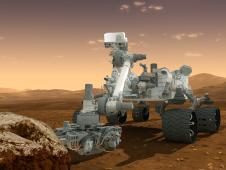 “Touchdown confirmed for @MarsCuriosity,” said a NASA tweet as its scientists celebrated back in headquarters.

The six-wheeled rover, weighing about one tonne, dwarfs all previous robots sent to the surface of the Mars.

It is about twice as long and more than five times as heavy as any previous Mars rover.

It has been equipped with 10 science instruments, including two for ingesting and analysing samples of powdered rock delivered by the rover’s robotic arm.

The rover was on a precise course for a landing beside a Martian mountain to begin two years of unprecedented scientific detective work, according to NASA.