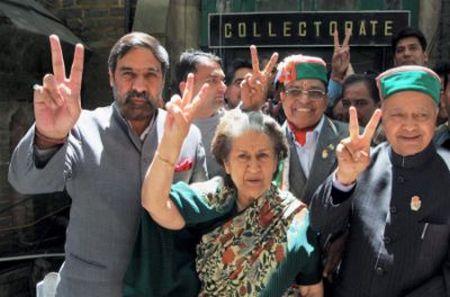 Shimla: Agitated over the lathi charge on party workers on Tuesday, opposition Congress staged a walkout on the last day of the current assembly after the members failed to get an assurance from chief minister Prem Kumar Dhumal over institution of a magisterial inquiry into the incident.

Just before the house was to be adjourned sine die, opposition leader Vidya Stokes was on her feet demanding a probe into the police action on congress workers at the Tuesday protest demonstration.

Defending the police action Dhumal said that Congress had earlier announced to stage a protest on August 27 but later changed it to August 29, a day on which Himachal Lok Morcha had already given notice for hold a protest demonstration.

However, congress was allotted space near Indian Institute of Advance Studies gate and at Central Telegraph Office.

He said that the government had no intention to curb the democratic rights of the people but no demonstrations are allowed near the assembly complex when the house is in session.

The chief minister said that police had recorded the entire episode on camera, which showed how the workers had turned violent and pelted stones in an attempt to break the security barricade near AG Office gate.

Not satisfied, the congress members insisted that the government institute a magisterial probe. On the demand being turned down, agitated congress members started raising slogan and walked out before speaker Tulsi Ram could adjourn the session.