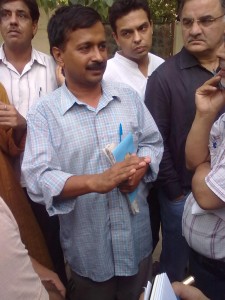 New Delhi: Several anti-corruption activists, including Arvind Kejriwal, were detained but later released when they tried to stage a protest outside the residences of the prime minister and Congress president here Sunday, police said.

The activists would hold their protest at Jantar Mantar, an India Against Corruption member said.

Manish Sisodia and Kumar Viswas were the other leaders who were detained early morning and taken to the police station.

However, the six Delhi Metro stations, which were ordered to be shut from 8 a.m. to 6 p.m. in view of the protests, are open to commuters, said a metro official.

A former member of activist Anna Hazare’s team, Arvind Kejriwal, has accused the Congress and the BJP of looting Rs.1.85 lakh crore through the allocation of coal blocks to private players.