Dehradun : Over 11 years after the formation of this small mountain state the Uttarakhand government has woken to the need of a clean Ganga. Chief minister Vijay Bahuguna has asked the centre for a sum of Rs 1600 crores so that work can be undertaken to prevent the dumping of untreated sewerage and other dirty water into the river from Gaumukh to the holy city of Hardwar. 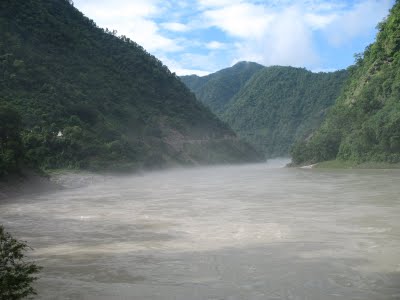 There is a feeling amongst the environmentalists of this small mountain state, that it is because of the demand of a clean and free flowing Ganga by the community of sants and sages, including a couple of Shankaracharyas, on grounds of which they are opposing the setting up of hydro power projects on the river and its tributaries, that the chief minister has shown a initiative for the project.

“It is a well known fact that Vijay Bahuguna is batting for setting up hydro power projects on the Ganga and its tributaries in Uttarakhand for which he is facing stiff opposition from the community of well known sants and sadhus. Obviously to appease them, so that he can convince them to allow hydro power projects in the state, that he has undertaken to cleanse the Ganga”, they claimed.

Meanwhile chief minister Vijay Bahuguna said that untreated sewerage of many small townships and cities along the Ganga are dumped into the river. “We are asking the centre for the funds so that the government can set up treatment plants in these townships and cities, which will prevent dumping of untreated sewerage into the river”, he maintained.

He said that the dumping of untreated water into the river along the entire course of its run in the Himalayan tract, is a major reason for the Ganga being polluted to the extent, that when it reaches the plains in Hardwar, the water is not even fit for drinking. Despite this, it is only the high cultural heritage value of the river, that millions of devotees come from all over the country to take a dip in the river and even drink its water in the belief that it will give them salvation.