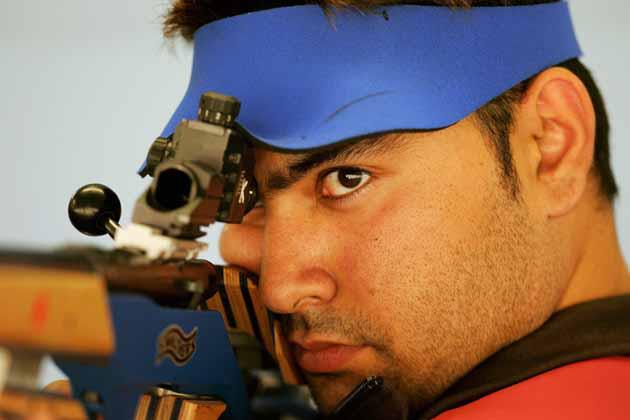 Narang has always said the Olympic medal was the one that was missing from his cabinet as he has won every shooting medal worth the name. He was 12th in Athens and was unlucky in Beijing as he finished ninth on a countback. It is an irony that Narang won the medal in the event in which defending champion Bindra couldn’t event qualify for the decisive final round.

After Beijing, Narang had looked determined for an Olympics medal and worked hard for it. Every shot he took looked as if it was directed at the Royal Artillery Barracks, where he gave India its third medal from the ranges in as many Games.

Narang had taken to shooting as a pastime, not in pursuit of excellence. Perhaps he couldn’t have imagined that one day his name would be in the honours list of Indian sports.

The handsome Air India executive’s successful journey to the world of fame can largely be attributed to his strong mental make-up which helps him keep his cool and high levels of concentration whenever the going gets tough, say those who know him well.

The eligible bachelor from Begumpet in Hyderabad has been there or thereabouts at the top for some years and he is as well known in shooting circles as Bindra, though the latter received all the accolades thanks to his Beijing gold.

In fact, more than the medals and the records, it was Narang’s victory over Bindra in the 10m air rifle event at the 2010 Commonwealth Games, equalling his own World record in the process, that stands out. With four gold medals, all with Games records, the genial 29-year-old Business Management graduate, became the country’s pin-up boy after the New Delhi Games.

Call it destiny or what you will, Narang failed to come good where it mattered the most, failing to qualify for the final by a whisker at Beijing where he was favourite. Bindra made the final and the rest is history.

Narang had another heartbreak when he was not considered for the Rajiv Gandhi Khel Ratna for three successive years and the distraught shooter nearly pulled out of the Commonwealth Games in disgust.

But the fighter in Narang persuaded him to let his guns talk – and how well they roared! He couldn’t translate his Commonwealth Games success in the 2010 Asian Games that followed soon, but he still won the silver at Guangzhou.

Unlike others of his tribe, Narang also gave back something to the sport by starting an academy – Gun for Glory – at Shiv Chhatrapati Sports complex in Balewadi, Pune, to train the next generation of Indian shooters.

As his father said after his London triumph, Gagan is good for more.