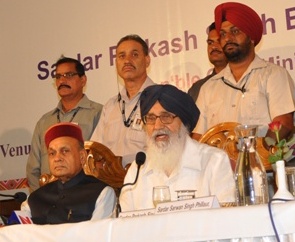 Shimla: Punjab veteran chief minister Prakash Singh Badal took the central government to task for usurping the constitution and tinkering with the federal structure of the union under which states had been reduced to ‘dignified municipalities.’

Taking questions after signing of a memorandum of understanding for linking the pilgrimage centers of Anandpur Sahib and Naina Devi with a rope way, Badal cited the case of agriculture.

“It is a state subject,” he said, “but minimum support price of a produce is declared by the center, so are the prices of diesel and fertilizers and the role of the states has been reduced to that of a dignified municipalities.”

State subjects were slowly being shifted to the concurrent list and later to the union list. Water issue was another such subject that had been encroached upon by the center, he said.

The country needs to do a rethinking and states should be empowered and their responsibilities increased as they were answerable to the people directly, he added.

Evading contentious questions about compensation for people in Himachal Pradesh affected by the four decade old large Bhakra Beas multipurpose projects and handing over the contentious Shanan hydroelectric project, Badal said, “such issues would be solved through a dialogue process.”

Defending Punjab’s stance on doing a U-turn on FDI in retail, the chief minister said, “we are against FDI in retail as big businesses would wipe out small retailers.”