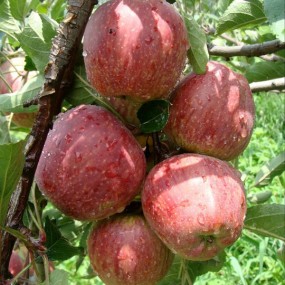 Shimla: The long dry spell during the monsoon season may see apple production in Himachal Pradesh falling by 20 percent from the projected 25 million boxes of 20 kg each but this will still be higher than last year’s production of 14 million boxes.

“Good rains at this point in time help attainment of optimum size of the apples,” S.P. Bhardwaj, former joint director at the Solan-based Y.S. Parmar University of Horticulture and Forestry said.

He said most of the apple-growing areas are facing a long dry spell. “This means the fruit will not attain the true size. If the size remains dwarf, the total production will fall.

“And undersize apples will not get remunerative prices.”

Apples are the mainstay of the state’s economy, with more than 200,000 families engaged in its cultivation of the fruit. The apple industry is worth over Rs.2,000 crore.

Early varieties such as Red June, Summer Queen and Tydeman’s Early Worcester, though inferior in quality, have already hit the markets but superior grades like Royal Delicious, Red Chief, Super Chief, Oregon Spur and Scarlet Spur are in the fruit development stage. These will start arriving in the markets by the middle of August.

Kanwar Yogendra, an apple grower in Kotkhai in upper Shimla, said: “The weather was perfect from the day the crop came out of dormancy (in March). Now when the crop requires rains, prevailing drought-like conditions is a matter of concern,” he said, adding “if such conditions continue, the size of the fruit will remain below normal.”

Balraj Chauhan, another grower in the Kullu valley, said: “If there is no sufficient rain in the next two weeks, chances of a healthy crop are bleak.”

Experts say the moisture in the soil enables the plant to get nutrients, which helps increasing the size of the fruit.

The meteorological office here said monsoon remained weak so far in the state.

“None of the 12 districts in the state has normal or excess rains. From June 1 to July 20, the state saw 51 percent deficit rain,” said meteorological office director Manmohan Singh.

The state has received just 135.8 mm rainfall against the normal average rainfall of 275 mm, he added.

Apple constitutes about 81 percent of the state’s total fruit production. The harvesting generally begins in July and continues till November.

According to the horticulture department, the per hectare yield of apple in the state ranged from five to seven tonnes, compared to 50 to 60 MT in European countries.

To raise production, the state has started an apple re-plantation scheme at a cost of Rs.85 crore to replace the old root stock with high-yielding varieties.

Besides apples, fruits like cherries, pears, peaches, apricots, kiwi, strawberry, olives, almonds and plums are the major commercial crops of the state.