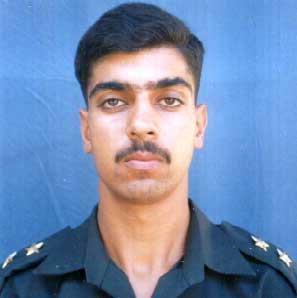 Palampur (Himachal Pradesh): It has been 13 years since their son was killed in the Kargil conflict and they were handed his mutilated body. As India celebrated Vijay Divas today to commemorate victory over Pakistan in Kargil, Capt Saurabh Kalia’s parents said they will approach the Supreme Court and President Pranab Mukherjee.

N.K. Kalia and his wife Vijaya have been waging a lonely battle for justice for their son, who was a victim of war atrocities.

“We have now decided to move the Supreme Court to get justice for our son,” said Kalia, 63, who retired as a senior scientist from the Council of Scientific and Industrial Research.

Saurabh, of the 4 Jat Regiment, was the first army officer to report the incursion by the Pakistani Army on Indian soil. He and five soldiers – Arjun Ram, Bhanwar Lal Bagaria, Bhika Ram, Moola Ram and Naresh Singh – were on a patrol of the Bajrang Post in the Kaksar sector of Jammu and Kashmir when they were taken captive by Pakistani troops May 15, 1999.

They were tortured for weeks before being killed. Their mutilated bodies were handed over to the Indian authorities June 9.

The elderly couple, settled in his tea garden town, about 120 km from the state capital Shimla, wants the Indian government to highlight the atrocities committed by the Pakistani Army internationally.

“We are moving the Supreme Court with a plea to direct the government (of India) to convince Pakistan through diplomatic channels to punish the soldiers responsible for the brutalities committed on the prisoners of war,” Kalia said.

The retired scientist is also pinning his hope on President Pranab Mukherjee, who took over Wednesday.

“Since the Kargil war, I have approached three presidents — K.R. Narayanan, A.P.J. Abdul Kalam and Pratibha Patil. From all of them, I have just received one standard reply: ‘Your letter has been received and would be forwarded for necessary action.’ But there is no subsequent action,” Kalia said.

“Now, we believe that Mukherjee, who held wide experience of defence and foreign affairs, will understand the case in a better way and help pursing the case appropriately with Pakistan and UN authorities,” he added.

Information collected by Kalia from the ministry of external affairs under the Right to Information (RTI) Act says “the government had conveyed the anguish and anger of the Indian people to the foreign minister of Pakistan during his visit to Delhi June 12, 1999. An aide-memoire was also handed to Pakistan June 15, 1999. However, Pakistan denied our claims”.

British lawyer of Indian origin Jas Uppal, who has launched an international campaign to highlight the plight of Saurabh and five other soldiers, has been helping the Kalias to petition the apex court.

She has been demanding the blacklisting of Pakistan for the purpose of giving international aid.

“I am campaigning to discover the plight of the Indian prisoners of war captured and detained by Pakistan during the Indo-Pakistan war in 1971. Yet again (in Saurabh’s case) the government failed to seek justice (at the international level),” Uppal had said in an interview.

On this Kargil Vijay Divas, an emotional Kalia said: “Our fight against injustice would remain alive till we are alive.”

India and Pakistan fought a limited war over the icy heights of Kargil in Jammu and Kashmir in May-July 1999. India took back all the positions that had been occupied by the Pakistani Army.