Terming it as a historic moment, Punjab chief minister Prakash Singh Badal, who was present on the occasion, said that the Rs 85 crore project was likely to be completed in three years.

For execution of the project a joint venture special purpose vehicle would be set up, he added. 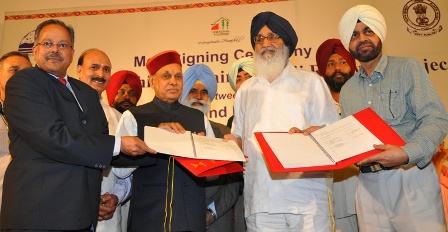 The 3.75 Km long ropeway link would facilitate the about 60 lakh pilgrims who pass through Anandpur Sahib to visit Naina Devi temple, said Badal.

He said the project was under consideration for a long time and was discussed by officers of both the states. “After giving the final touches on the terms of reference, the historic MoU stands signed,” he said.

Speaking after the agreements were signed chief minister Prem Kumar Dhumal said that the ropeway link would not only connect two holiest of the holy pilgrimage centers but would also bring about synergies between the two states.

In the presence of chief ministers of HP and Punjab, the document was signed by chief secretary Sudripta Roy for HP and Geetika Kalha, principal secretary tourism on behalf of Punjab.

The Punjab Infrastructure Development Board has been appointed as the nodal agency for structuring the project and carrying out the bid process.

The project is to be given out on a design, build, finance, operate and transfer mode, on basis of maximum annual concession fee that would be shared equally by both the state government after deducting expenses.

The private partner would operate the project for 40 years after which the assets are to be transferred back to state authorities.