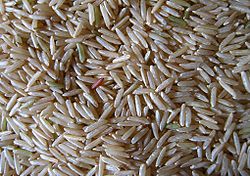 Dehra Dun: The Dun valley in Uttarakhand was known for quality Basmati rice. There was a time when gift packs of five kgs and 10 kgs were available at all ‘kiryana’ and gift shops. In fact it was the thing that residents of the city took when visiting friends and relatives in other cities and it was not highly appreciated but much in demand also.

A reason why Basmati rice flourished in Dehra Dun was the high quantum of rain that the city and its immediate outskirts received, which was an essential for the rice. According to Tota Ram, whose rice in the days gone by was much in demand, claimed that Basmati requires more water than other varieties of rice, and as the city received ample rain, high quality Basmati was produced.

Basmati from the Majra area of the city was said to be of the most superior quality and was not only highly priced but much in demands. However, as the city spread our about two decades back and more recently after the state of Uttarakhand was carved out and Dehra Dun became the state capital rapid urbanization has made it a concrete jungle.

Sadly the entire Majra area, where one could get the aroma of Basmati rice as fields flourished is today full of enclaves and colonies. There is perhaps not even a handful of area under Basmati. Tota Ram, one of the old die hards who still retains a portion of his agricultural land (his sons having sold the major portion at lucrative price), still grows some of it, more because of passion than livelihood.

He, however, was of the view that even the intensity of rains in the Dun valley are not the same as they were a couple of decades back. “Things have reached a stage when there is not water which Basmati rice requires and though I do grow it in the little land holding left with me, but the quality is not the same. The main quality of Basmati is its aroma, not the length of the cooked grain or its flavour”, he maintained.

In fact he went on to add that at times because of less rains there is not enough water in the fields for proper replanting. “The Basmati is first grown in a small patch and then after the fields are prepared with almost knee deep water the plants are taken out and replanted, which ensures high quality rice. But preparing the fields with lots of water is a must”, he claimed.

This year ironically the season for sowing Basmati has gone as there have been no rains. In June this year the city got no rain at all as compared to 386.5 mm last year, which was not a very heavy monsoon year. In July this year it has rained barely 35 mm till Wednesday whereas in July last year it had rained 788.7 mms. Though the weather man hopes that the rains in August will make up for the deficiency the time for replanting Basmati will have gone.

With almost all of Majra where one could see hectares of land under Basmati, having turned into a concrete jungle and now the rains also not only having reduced greatly in intensity and quantity, the favourite rice that gourmets demanded all over will hardly be there on the plate. Yes Basmati from other areas of Uttarakhand and other states will be available, but that aroma, which gave Dehra Dun Basmati its popularity, will be missing.