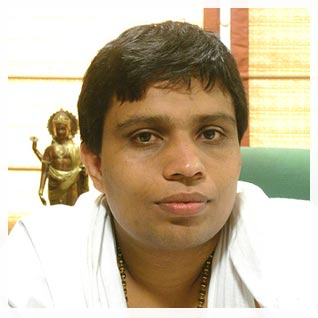 Dehradun: Acharya Balkrishna, close associate of yoga guru Swami Ramdev was today arrested by a CBI team from the Patanjali Yogpeeth in Hardwar and brought here to the CBI office, where he likely to be detained for the night before being produced in the court tomorrow morning.

A local CBI court had issued non-bailable warrants against Acharya Balkrishna in the case pertaining to his passport having allegedly been made on forged documents. Following this, the local intelligence unit and Hardwar police was asked to detain Balkrishan and a special team of the CBI later took him into custody.

Informed sources said that Balkrishna would be taken to the Doon Hospital here for a medical check up and is in all probability not likely to be produced before a magistrate today. It will only be done tomorrow, as the lawyers of Dehra Dun remain on strike on Saturdays, which may make it difficult for the yoga guru’s associate to get bail. He may be sent to judicial custody if bail is not granted.

Meanwhile a large number of supporters of Swami Ramdev and Acharya Balkrishna gathered before the CBI office here and raised slogans against the CBI and in favour of the arrested person. Swami Ramdev on his part alleged that it was a conspiracy against him by the Congress because of which his close associate had been arrested in a bid to malign him.