All the three 77 MW units at Chamera III project on River Ravi in Chamba district of Himachal Pradesh have been put on commercial generation, said ABL Srivastava, director finance NHPC.

The power generated from the project is to benefit the states of Himachal Pradesh, Punjab, Rajasthan, Uttar Pradesh, Uttarakhand, Haryana, Jammu and Kashmir, Delhi and Chandigarh. 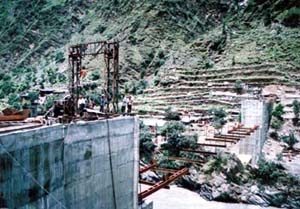 Mr Srivastava said 231 MW Chamera – III is a run of river scheme on river Ravi in the upstream of 300 MW Chamera-II hydroelectric project in Chamba district of Himachal Pradesh.

This project is situated in comparatively lower Himalayan region and has been constructed amidst metamorphic rocks of Chamba formation on river Ravi. The project would generate 1104 million units annually in a 90 per cent dependable year, he added.

The Chamera III project was sanctioned by Central Government at a cost of Rs 1,405.63 crores.

‘With the commissioning of the 231 MW Chamera-III project in Himachal Pradesh, the installed capacity of NHPC has gone up to 5,526 MW, which includes 1,520 MW through our JV subsidiary NHDC,’ Mr Srivastava added.

He said NHPC is slated to add another 981 MW in the current financial period.