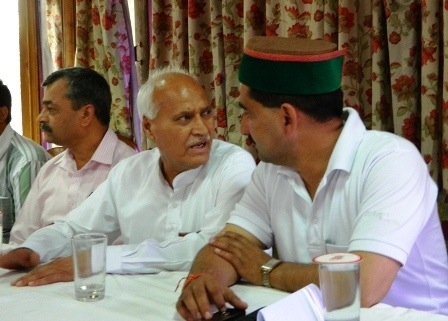 Dharamsala: It is not just cricket is how senior congress leader Chander Kumar put it when he lashed out at the PK Dhumal led BJP government saying that undue favours had been granted to the cricket body as taxes, including entertainment tax, payment for security services provided and other dues had not been levied or recovered.

Speaking to journalists, the former MP said, “should congress come to power in the coming elections all dues would be recovered.”

Accusing the government of posting tainted bureaucrats on sensitive postings, he said that a congress would open up all corruption cases that are being dropped at the behest of vested interest in the government.

The reputation of the Dhumal government was so discredited that cabinet ministers, MPs and now even MLAs were openly accusing it of corruption, said Chander Kumar.

The leader said that a move to raise the retirement age from 58 to 60 was with a sinister design for the coffers of the state were empty and the government did not have money to pay those who are due to retire on attaining the superannuation age of 58 years.

Coming out in support of embattled union minister Virbhadra Singh, Kumar said that the assembly election would be fought under the leadership of the five time former chief minister.

He added that the party would honour Virbhadra by holding a grand rally in Shimla on June 23 for completing an active 50 year political career with the congress party.