Chandigarh: The Haryana government today announced a reward of Rs.10 lakh for Rani Rampal, who was adjudged the best player of the just-concluded junior women’s hockey World Cup in Germany. 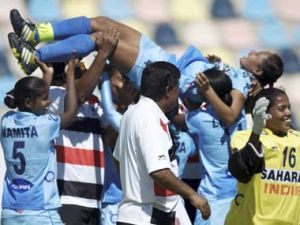 Rani, who is the daughter of a cart-puller from Haryana’s Shahbad town, 65 km from here, scored three goals against England as India won 3-2 in the penalty shoot-out to claim the bronze, its maiden World Cup medal in the women’s category. She scored India’s solitary goal in regulation time and followed it up with two more in the penalty shoot-out.

Haryana Chief Minister Bhupinder Singh Hooda, while announcing the reward for Rani, said that she had brought laurels to the state and would inspire other girls with her hard work and determination.

Hooda also announced a reward of Rs.5 lakh for Baldev Singh, the coach of state’s women’s team, who was also a part of the Indian contingent in Germany.

Out of the six women players from Haryana, five are from Shahbad Hockey Academy while one hailed from Hisar. Besides Rani, the other Haryana girls are Navjot, Manjeet Kaur, Navneet Kaur, Monika and Poonam Rani.

The Haryana government had earlier announced a cash award of Rs.5 lakh each for all the girls.