Shimla: Holding that the state government was indifferent toward problems being faced by apple growers, Communist Party of India (Marxists) today threatened to launch a mass agitation, should the government not act within a week to improve the road network and regulate post-harvest operations. 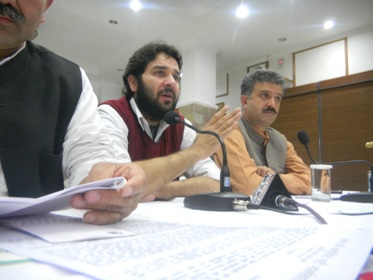 Speaking to the media persons, Sanjay Chauhan, state committee member CPI(M) said that there was complete chaos in the marketing operations during peak apple season time as black marketing was being resorted to by suppliers of packaging material.

Shortage of transport vehicles was not being met and hapless small and marginal farmers were having to pay stiff freight charges that were 50 to 100 % higher than the freights announced by the government, he said.

Due to breakdown of rural road network in Chopal region, there were over 30,000 boxes awaiting transport facility to access the market, he claimed.

Kuldeep Tanwar, State Secretariat Member CPI(M) said the government had abdicated its regulatory role and the farmers were facing the brunt.

â€œThe government needs to treat the situation as an emergency as the years livelihood of about 3 lakh farmers was dependent up apple crop,â€ he said.

Recalling an earlier agitation in 1992, when 3 apple growers had died in police firing, Tikender Panwar, member secretary said, â€œunless the government acts within a weekâ€™s time, CPI(M) would be forced to launch a mass agitation.â€

However, the government has contested the protests being made over shortcomings pointed out by saying that in the midst of a heavy monsoon, a record number of 1.55 crore apples boxes have been marketed during the month of August.

Overall the government claims that over 2.25 crore boxes during the current harvest have been marketed.

This had been possible due to proper and adequate arrangements made by the State Government for the apple season, the communiquÃ© stated.