Shimla: The Himachal High court today dismissed union steel minister Virbhadra Singh plea in a contentious audio CD case paving the way for the state to file the challan in a case registered by the State Vigilance and Anti-corruption Bureau. 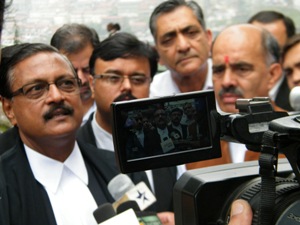 Speaking outside the court, Satyapal Jain, the governments lawyer stated, â€œthe court has dismissed the application filed by Virbhadra Singh and his wife Pratibha Singh which had sought to quash registration of an FIR in a case registered by HP police and had asked for a CBI in the matter.â€

â€œWe let the court know that the police investigation in the case was complete and there was no malafide in the matter as the police officer who had registered the case, was later taken up by Virbhadra Singh as private secretary in his capacity as a minister in the union cabinet,â€ said Jain.

â€œBy dismissing the application, the court agreed with our contention of letting matter be decided by the trail court as the police have completed all investigations,â€ he added.

However, the court granted 15 days for the judgment to become operative, which Sharwan Dogra, lawyer for the petitioners said, â€œwas in response to their application of letting the court know that they intended to contest the matter in the Supreme Court.â€

Jain said that only after reading the judgment, would the government consider whether it could file the charge sheet in the court before the 15 days reprieve granted as the main plea has been dismissed in totality.

The recorded conversations were made public by former congressman Vijay Singh Mankotia who had released the CD to the media at Dharmshala, just before a crucial parliamentary by-election in June 2007 wherein Prem Kumar Dhumal was the BJP candidate from Hamirpur.

This contentious CD was later turned into an election issue by BJP for the assembly elections that the party won and Dhumal became chief minister in December 2007.

On forming the government, the CD content were got investigated and a case was registered. Virbhadra approached the High Court, seeking quashing of the FIR.

Based on the new material Virbhadra had termed the audio CD involving him as a fabricated and asked the court to have the role of Dhumal and Manhas in the matter investigated.

Holding that the police had a bias against him in filing of the FIR, Virbhadra had also sought that the matter be got investigated by CBI.

The court after earlier having dismissed the plea of including Dhumal and Minhas in the case in July, today rejected the matter of handing over the investigation to a central agency or of quashing the FIR.