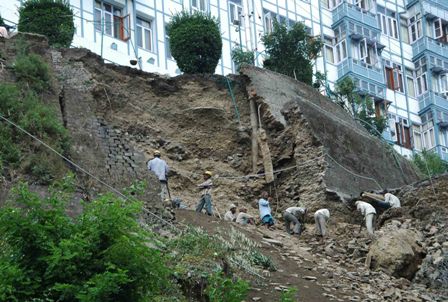 Shimla: In the vicinity of the unauthorized multi-storied building that houses the Himachal Pradesh High Court, excavation for laying the foundation of a lawyers chambers building close by, has threatened the heritage building of Oberoi Clarke’s Hotel, one of the first properties bought by founder MS Oberoi as he set out to lay a global hospitality chain in the 1940’s.

“It was a heavy down pour yesterday that caused damage to a retaining wall of the Hotel Oberoi Clarkes,” said Tikender Panwar, deputy mayor of the city.

While the hotel management was tightlipped about collapse of the wall that has brought down a terraced garden, however the staff members expressed fear of further damage to the property that could even threaten lives of the residents.

To make way for the construction of the lawyers chambers, not only were about a dozen green trees felled but as soon as excavation work started an vital motorable road link that connected the High Court to the highway broke down after a retaining wall caved in.

A wire mesh supported wall that was constructed in haste to partially support the broken road and the hotel base gave way yesterday, when a storm lashed the city.

“These are only the first rains of the season, our hotel is not safe or strong enough to face the full fury of the monsoon as the basement on which the foundation stands lies exposed to a sliding zone,” said a Clarkes hotel staff member on conditions of anonymity.

The heritage hotel was constructed in 1898 and was one of the first acquisitions of MS Oberoi, the founder of the Oberoi hotel chain, when he set out to become an entrepreneur after having been an employee at Cecil, a hotel that too was acquired.