Shimla: Sirmaur identified as one of the 23 backward districts in the county has been picked for a centrally sponsored scheme for formation of women self help groups, top officials disclosed at a state level banker meeting here on Friday.

Presiding over the 124th State level Bankers Committee meeting chief secretary Sudripta Roy said that the central scheme had been launched recently and banks have been given a target of financing 995 SHG’s in the district in the current financial year. 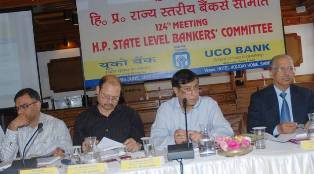 The chief secretary stressed upon creating livelihoods for accelerating the pace of socio-economic growth. He asked banks to invest in infrastructural financing as the government was supporting public private partnerships in the core areas.

Reviewing the financial inclusion status in the state, the chief secretary noted that there were 532 villages having a population of over 1000 people that were without banking outlets and banks have been given a target to provide banking access in them.

Another 44 villages having a population of over 2000 and presently covered through a business correspondent model of banking are to be converted into ultra small branch type of banking outlet, a concept recently introduced by the ministry of finance for providing banking and financial services in a sustainable manner, said Roy.

Mentioning the modification carried out in the Kisan Credit Card (KCC) scheme, the chief secretary stated that the central government had directed banks not to charge processing fee on advances of upto Rs 3 Lakh under the KCC scheme.

Speaking at the meet S Chandrasekharan, Executive Director UCO Bank which is the lead bank for the state disclosed that banks had set a target of Rs 3211 crore credit for the agriculture sector under annual credit plan 2012-13.

With banks having disbursed a total credit of Rs 9656 Cr to 3.24 beneficiaries in 2011-12, Himachal overshot its annual credit target for the year to record a healthy 128 percent.

In 2011-12 banks opened 75 new bank in the state taking the total bank branches to 1564, besides having installed 612 ATMs as additional delivery channels for providing banking services.