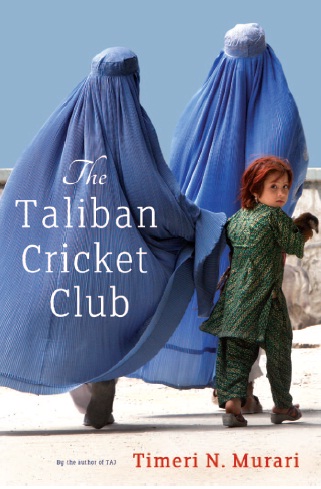 New Delhi: Cricket has not caught on to any major extent in Afghanistan even 11 years after the Taliban was pushed out of Kabul in 2001. The sports-shy Afghans are still too battle-scarred to laugh their angst away on the pitch.

However, literary fiction explores unimaginable possibilities for peace in Afghanistan and escape from the daily acts of subversion.

Cricket, the game of friendship, and the tyranny of the Taliban in Afghanistan are pitted in a battle of wits and convey a powerful message of freedom, human resilience and defiance in award-winning writer, playwright and filmmaker Timeri N. Murari’s new novel, “The Taliban Cricket Club (Aleph Book Company)”.

“The possibilities of putting two opposites together and exploring their sheer contraction made me use cricket as a symbol of democracy, freedom, discipline and harmony against the tyrannical regime of the Taliban,” said Murari.

The writer said he had “read a small news clipping in 2000 that the Taliban was trying to promote the game that was against violence”.

“The idea was bizarre. I started making notes and researched about the Taliban-led Afghanistan. Cricket did not happen in Afghanistan till 2002 – when Afghans began to play cricket a little more seriously after the Taliban left,” said Murari, whose movie, “Square Circle”, was chosen as one of the top 10 by the Time Magazine.

“So they brought the game back to Afghanistan. In 2000, no one played the game in Afghanistan. The Taliban had even banned traditional sport Buzkhasi, a team sport played on horse-back. I decided on a cricket tournament and a formal team as my theme to teach the Afghans to play the game,” Murari said.

But cricket as a game could not really take off in Afghanistan, the writer rued.

Murari steps in the shoes of an Afghan woman, Rukshana, who is offered an escape route by the Taliban from her warring nation to Pakistan when the local Taliban warlord Wahidi announces that the winning team of a cricket tournament that he is organising will be sent to Pakistan to train for an international-level match.

No one in Afghanistan knows how to play cricket except Rukshana. She had learnt the game during her years in New Delhi as a student of journalism.

Murari speaks through the voice of Rukshana – a pretty young journalist forced to hide behind the “burqa” after a raid on her office in Kabul. She prepares to play the game to escape.

Here the writer twists the tale. When Rukshana’s team comprising family wins the match, the Taliban warlord betrays Rukshana and decides to send his newphew’s state team – the loser – instead to Pakistan.

The betrayal and the Taliban warlord’s personal designs on Rukshana – he wants to marry her – forces her to hatch a daring escape plan to impersonate as the rival team to flee to Pakistan.

Cricket in Murari’s book becomes a metaphor for freedom and a symbol of a sub-continental romance between the protagonist Rukshana and her friend’s brother Veer, a young man from India.

For most part of it, the plot reads like a movie, gripping and veering off unexpected bends.

“The idea of teaching cricket to Afghans did not feel strong enough. So I thought if I had a woman to play the game and teach it to her cousins and brothers to escape the Taliban, she would become a symbol of rebellion through the game,” Murari said.

Murari went to Afghanistan in 2010. “I had a contact who set up meetings with a cross-sections of people. The women told me how they lived in Afghanistan and survived the Taliban. The Afghan people are the most hospitable and generous people, but they are not a sporting country. They do play football and are sending few athletes to London…,” Murari said.

The writer said “women are discouraged from sports in Afghanistan because it spells freedom and healthy life”.

Murari said the socio-political milieu was slowly changing in Afghanistan. “The women I spoke to were professionals and they were not always accompanied by their mahram for menfolk. The country had a growing tribe of women journalists – some of them dating to the Taliban years who secretly couriered their dispatches to organisations like Revolutionary Assn of Women in Afghanistan (RAWA) located in Pakistan, who would run these stories,” Murari said.

The writer, who has also been an international journalist, said “the condition of Afghanistan was fragile”.

“I personally think the country could plunge into a civil war and break into three autonomous regions after the pullout of US troops,” Murari said. He is planning to write another book on Afghanistan.