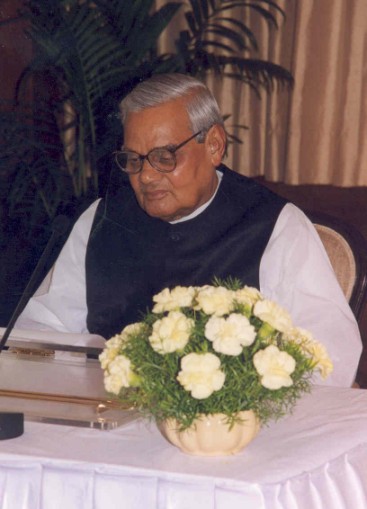 Regardless of Vajpayee’s waning political importance, Dhumal is still ‘signing’ in praise of his ‘idol’ by naming scheme after scheme after him.

In over four years at the helm, he has dedicated about a dozen schemes and projects to Vajpayee, the latest being the Atal School Uniform Scheme that provides free school uniforms twice a year to all students from Class 1 to 10 in state-run schools.

At the launch of the school uniform scheme in Nahan town May 9, where BJP chief Nitin Gadkari was also present, Dhumal said: “Shradhey (respected) Atalji has special love for the people of the state. We have launched various schemes in his honour.”

He said his government had earlier launched the Atal Bijli Bachat Yojna under which four CFLs (compact fluorescent lamps) were provided to 1.65 million domestic electricity consumers free of cost with the provision that the defective bulbs would be replaced within 18 months.
At the launch ceremony Nov 23, 2008, Dhumal had announced that the CFLs would be distributed by Dec 25, Vajpayee’s birthday. Kullu was specifically selected for launching the scheme as Vajpayee’s house in Prini village is located near the town.

In routine public addresses as well, Dhumal makes it a point to express his gratitude to Vajpayee who, as prime minister, provided all the support– allocating central funds and projects — to speed up development of the state.
“In the days of shifting loyalties, Dhumal continues to remain loyal to his ‘mentor’ Atal.

He has never missed an opportunity to praise the former prime minister because of his ties with the state. Some of the couplets penned down by Vajpayee easily come to his lips,” a senior BJP leader said.

During his budget (2012-13) speech in the assembly, Dhumal, who also holds the finance portfolio, said: “Speaker Sir, I would like to remind the hon’ble members that during the five-year period of the NDA government from 1999 to 2004 under the able leadership of Sh. Atal Bihari Vajpayee, the inflation was kept under control and this increase was only 20.8 percent.”

“Panchayats in our state are performing their duties well. In order to further encourage them, I announce the launch of Atal Adarsh Gram Panchayat Puruskar Yojna from the next financial year… the total expenditure on the scheme will be around Rs.2.5 crore,” Dhumal said in his budget speech.

“The government proposes to rationalise the existing scholarship schemes and launch the Atal Chhatrvriti Yojna in 2012 by substantially increasing the amount of scholarships available to children of BPL families studying in government schools,” the chief minister said.

On Vajpayee’s birthday in 2010, Dhumal launched a round-the-clock free ambulance service across the state. This project, Atal Swasthya Sewa Yojna, is jointly funded by the National Rural Health Mission and the state government.

In April last year, the foundation stone of the Atal Bihari Vajpayee Government Institute of Engineering and Technology at Pragati Nagar in Shimla district was laid by the chief minister.

“The people of the state were indebted towards Vajpayee for his generosity. Special industrial package was provided (to the state) by Vajpayeeji, which gave boost to industrial investments. At no point of time did he turn down the request made by the state and had been liberal in granting financial packages,” said Dhumal.

Besides other schemes, the state has launched the Atal Awas Yojna under which financial assistance is being provided to weaker sections and an education hub, Atal Shiksha Kunj, near the industrial town of Baddi.