A long time ago, I heard about a lady who was running a single-room school in the slums of the Mandi town, Himachal Pradesh. Recently, I got an opportunity to catch up with this real life hero. An hour long conversation with this energetic and selfless woman became an unforgettable memory of my life. 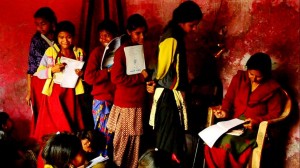 A 49 year old lady teaching in the slums with a single aim – to bring about positive change in their lives! She is hopeful, and almost ‘knows’ that times will change because she has seen positive changes coming along in her life. She hopes that someday the educated youth of this country will consider education as a career option because if anything needs to be improved in our country the most – it is the educational system; and it is not possible without the ‘willing’ participation of the young blood.

When did you start with this center?

We started off with the center on 28 December 2006. I was going through a very rough phase and I could not see any light in my life. As they say good and bad are complementary to each other, it was my turn to see the better side of life.

I met Mr. Sansar Chand, who was the then Head of Sewa Bharthi Mandi. It was from him I got to know about the task of teaching in the slums and I immediately responded with a ‘yes.’ As I was going back from the office I was wondering at what I had just said in the Sewa Bharthi Office.

The notoriety of those slums had reached my ears and now I was worried because teaching kids was one thing and dealing with their parents, who were drunk and abusive most of the times was another thing altogether.

You made a conscious decision by choosing these slums as your workplace. How was the life different here? What were the difficulties you faced and how did you combat unseen problems?

Without the support of my family and Mr. Sansar Chand I could not have reached anywhere with this program. I was scared to death! I wondered how I will ever make them understand for convincing them was totally out of the picture.

I told myself that my primary task is to teach kids and why would anyone mind that? Some generous parents decided to send their kids and that’s when the project started.

I was dealing with a very small group and at times it embarrassed me to look at those questioning eyes of the slum dwellers. Mr. Sansar Chand used to visit the center every other day and he motivated me to keep working. Initially it was about teaching two or three kids and that was all.

Whenever I tried to talk sense to their ‘drunk’ parents they would start fighting with each other, and sometimes with me as well. In the middle of the class, parents would come and take their kids away and I had to start everything from scratch. I have lost count how many times that happened.

Dealing with the parents was very difficult but handling those kids was the real challenge. They used to bring their family problems to the classroom and their parents would follow them to the classroom. At times I used to feel that I am a policewoman solving their personal and property-related issues. They used to brew alcohol at home and as you know it, poverty and alcohol is the deadliest combination – a guaranteed way to invite trouble to one’s life. Kids used to bring their mothers to the classroom if they had any problem with other students. So mothers would start fighting and fathers would step in, followed by the kids themselves! It was a chaotic situation for me and every day I had to face the same challenge of putting some sense into their heads.

All these problems are more than enough to scare a normal human being. How did you manage to continue? 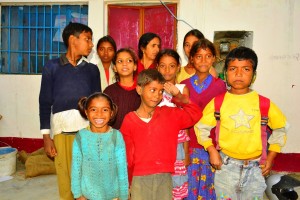 I adopted the method of storytelling. Ironically matured adults do not understand things easily whereas kids do, so I decided to tell my students about the aftermaths of consuming alcohol. I told them stories and urged them to talk to their parents about quitting drinking. It was a difficult and unconventional approach but it worked for me. Kids would go home and tell their parents about what they had learned in the class. Every time they saw their parents drinking in front of them, they would question it and raise their voices against it. Gradually womenfolk also realized that fighting is no solution and they also joined hands with their kids in fighting against the evil of drinking. Now that the problem of drinking was disappearing, I could focus on teaching and by then I had started feeling confident too.

Kids started liking me and I thought of educating their parents as well.

My classroom was probably one of its kind because kids and parents were taking the same lessons in the same class. However, that idea did not go well with the parents and not many parents enrolled for the class.

Their teachers in school got to know about me and they requested me to make parents understand the importance of hygiene. I took up the challenge and started the cleanliness drive in the slums. I made it mandatory for them to wear clean clothes in my classroom.

Money is not so big an issue for these people. They earn enough, have well-built houses, mobile phones, TVs, and many other things that are not so ‘fundamental’ in life. Gradually that changed too and now my students are as clean as any other public-private school student.

What and how do you teach them?

It is more like a tuition class – students belonging to different age groups come and sit together. We study Hindi, English, Mathematics, and Science. Currently I have 26 students and they all learn with the help of each other. We also study Moral Education and I tell them stories from the past and the present.  I take them around for sightseeing as well so that my education does not restrict them to books only.  I feel that they should be taught computers but we have limited resources and I cannot teach them everything because I have my own limitations.

We have a single classroom and we manage happily there. It would be great if we can afford another room and most importantly another teacher who can teach them computers and science subjects for higher classes. Earlier people from the town used to come here to teach but that didn’t last long because walking all the way from the town to this shady place is not everyone’s cup of tea yet I am hopeful because balancing of good with bad is the law of nature. We need to wait for the right time, patiently.

How did your family react to your decision of working in the slums?

Ours is an understanding family, so I never had any problems. My husband, daughter, and son always appreciated the idea of working with the underprivileged and they always motivated me to go ahead. Whenever I would get late for home, my husband would take care of the household chores.

How has this project helped you to grow as a person?

When I started teaching there I was scared of the surroundings. Now, the times have changed.

When I see my students behaving properly in schools, parents motivating kids to study hard, and mothers working for the betterment of their community, I proudly tell people that they are my students, all of them, mothers, fathers, and kids.

The few hundred meters which were frightening initially have now become a part of my existence. They have started voting in the elections as well which the younger and educated generation finds a boring thing to do. They have made me realize the value of hardships in life.

Sarita Vaidya has made an impact on her own, alone.

She has been working for the last six years and the size of her classroom is growing every year. The ladies in the slum now run sewing centers from home, men have stopped brewing alcohol, and kids want to become doctors, engineers, and (surprisingly) poets too. Things can get better from here if only those who think they know solution(s) start contributing.

Impossible is nothing. Imagine how big a transformation is possible if youngsters in India take up the role of an educator. There is no use whining about the shortcomings of the education system, the poor quality of facilities in public educational institutions or lack of employment opportunities. Sarita Vaidya did not keep mum. She made a decision. She faced problems. Finally, she made it.

A Civil Engineering graduate from NIT Hamirpur, Tarun has worked in the hydro power and IT sectors in the past. He loves writing and sharing the positive stories floating around in the society, which usually go unnoticed.

For over 2 years, Tarun wandered around the passes, mountain peaks, dangerous roads, and remote villages in the Indian state of Himachal Pradesh on his motorcycle.