New Delhi/Srinagar: It is an animal that is as much an icon of Kashmir as the beautiful Dal Lake and its shikaras. The magnificent spiral-horned Markhor, the largest member of the goat family, has for centuries inhabited the high mountains of Kashmir.

But human greed and interference have placed this graceful animal on the ‘critically endangered’ list with barely 350 members remaining.

Which is why the notification of the Tatakuti Wildlife Sanctuary near Shopian in South Kashmir by the Jammu and Kashmir government April 27 has come as a big boost to conservationists fighting for the very survival of the Markhor.

Tatakuti is the latest addition to the wildlife sanctuaries and national parks already declared to conserve the Pir Panjal or Kashmir Markhor (Capra Falconeri Cashmiriensis). Others parks are Hirpora (Shopian), Limber and Lachipora (Baramulla). There is also the Kajinag National Park (Baramulla).

The Pir Panjal Markhor is one of five distinct species found in Asia. It is found only in India’s Jammu and Kashmir. “They were once distributed from Banihal, through the Pir Panjal range, crossing the Jhelum river over to the Kajinag and Shamsabari ranges, into Gurez and then into Pakistan-administered Kashmir.

Most experts maintain that barely 350 of this species remain. “As an informed guess, I will put the population at 300-400, with close to 250 being in Kajinag itself,” says Bhatnagar.

Though the Markhor is included in the Indian (Schedule 1) and Kashmir Wildlife Protection Acts, the threat against its survival remain very much in place.

Insurgency, cross-border firing, competition with livestock for grazing ground, poaching for its antlers as trophy and for its meat, fragmentation of habitat due to LoC fencing, lack of awareness and developmental projects, all threaten the Markhor.

Given the multi-fold threats facing the Markhor, is it enough to just declare another sanctuary?

“No. Declaring a protected area is just the starting point and not the end of the crusade of conservation. A sanctuary or a national park does give you the necessary legal teeth to fight the odds, but implementation of the laws and execution of strategies on ground is what matters most,” Intesar Suhail, Wildlife Warden, Shopian Wildlife Division says.

Perhaps the greatest threat facing the species is competition from herders. In late May-early June, migratory (Bakkarwals) and local herders arrive with their livestock in the protected areas meant for the Markhor. They occupy the grazing grounds and force the Makhor to graze in other, mostly sub-optimal areas.

Speaking for the herders, Mian Altaf Ahmad, state Forest Minister says: “These people have been doing this for decades. It is the only economic activity they pursue. They have their rights. You cannot deny them those.”

How can a balance be then found? “The best way to address the issue is to have a rehabilitation plan for the herders which should include providing alternative grazing areas and if possible, alternative means of livelihood,” says Suhail. 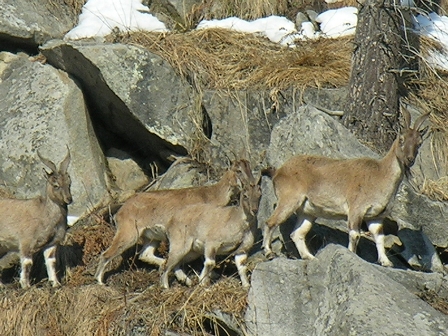 “Critical areas like fawning grounds should be spared at least for some time during the fawning season. Similarly, critical habitats like those used in early spring should not be disturbed during that season,” says Riyaz Ahmed Peerzada, Manager, Mountain Ungulates Project, Jammu and Kashmir.

Another threat is that the Markhor’s habitat borders the volatile Line of Control. Can wildlife conservation override national security?

“LoC fencing is thought to have affected the Markhor movement in Limber and Lachhipora. National security is indeed paramount but the interests of wildlife and biodiversity need to be safeguarded simultaneously,” feels Suhail.

Then there is the Mughal Road project, which is being built to connect Srinagar and Rajouri. It would slice through Hirpora, endangering the 50 individuals that reside there.

“The permission to construct the Mughal Road was granted by the Supreme Court only after putting some conditions like extension of the sanctuary area and fencing of vulnerable areas which have been accomplished. Further measures like traffic regulation, closure of road during nights and compensatory afforestation of eroded road-sides shall be taken up once construction work concludes,” promises Suhail.

What else can be done to manage Markhor population?