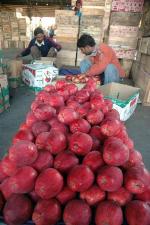 New Delhi: Himachal Pradesh yesterday demanded a hike in the duty on imported apples to protect the domestic industry.

“There is a need for increasing customs duty on imported apples from 50 percent to 80 percent,” Horticulture Minister Narender Bragta said at a meeting with officials of the commerce ministry here.

He said customs duty earlier was raised from 30 percent to 50 percent during the National Democratic Alliance (NDA) government which had greatly benefitted small apple growers.

He said that Himachal Pradesh, one of India’s major apple-producing regions, is facing tough competition from China, which is marketing apples at much lower rates in the Indian market.

The minister also asked the central government to give special product status to the state’s apple crop to protect indigenous crop varieties in the domestic market and expand scope for their export.

Bragta said apple is the main crop of the state, with an annual turnover of around Rs.2,500 crore.