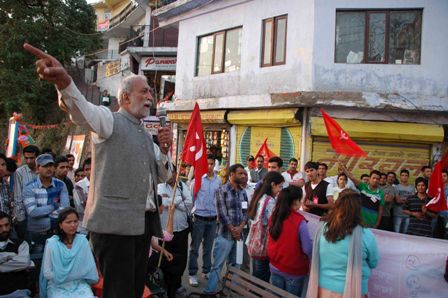 Proving to be a hard campaigner, the Communist Party of India (Marxists) has queered the pitch for BJP and Congress in the Shimla Municipal Poll.

With the poll scheduled for Sunday (May 27), the city in peak tourist season is fully caught up in a poll fever that is witnessing a multi-cornered contest for Mayor, deputy mayor and the 25 Councillors elections.

Since 1986, when election to the civic body was first introduced, Shimla municipal council has been a congress bastion.

Ahead of the general assembly poll to be held in October – November; the importance being given to the poll can be gauged from the fact that union cabinet minister Virbhadra Singh and Anand Sharma have campaigned, besides a host of BJP ministers and politburo member Sitaram Yechury is due to campaign tomorrow.