Shimla: Union minister Anand Sharma lashed out at the Dhumal government for its oversight in permitting a private company to violate environment laws that have been heavily penalized by courts. 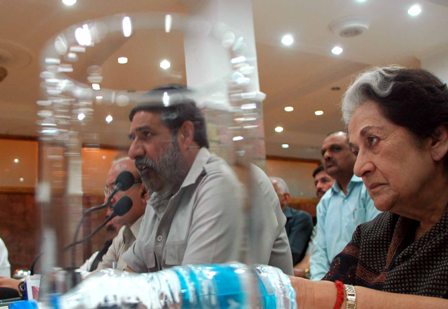 ‘Take action by law‘, was how the minister for industry and commerce reacted to the court verdict fining Jaiprakash Associates Ltd (JAL) Rs 100 Cr for setting up a cement plant in violation of green laws and directing for raising an unauthorized thermal plant. At the same time the minister said that it was a duty of the state government to explain how the violations were allowed.

Sharma, here for pitching his support for the party’s candidates in the municipal election said, “a company having polluted the environment and violated laws showed collusion, convenience and overlooking by the authorities and wherever violations have taken place, action should be taken.”

Issue of discrimination against the state by the UPA government in a municipal poll was unwarranted, he said adding that the central government was transparent in funding national programs like MNREGA, Rural health mission, urban renewal mission and others in all states on a equitable manner.

Failures of the state government should not be put at others, said Sharma while pointing out that it was unfortunate that a centrally funded spice park project for Nadaun in chief minister Prem Kumar Dhumal home district has failed to take off because of lack of interest shown by the state government.

Talking about the demand of Congress naming a chief ministerial candidate for the assembly election due later in the year, the minister that it was too early to raise such a question and this was an issue which would only be decided by the party high command, should Congress win the elections.