Shimla: Suspended BJP MP Rajan Sushant held a day long fast under the statue of Mahtama Gandhi on The Ridge here protesting that the proposed HP Lokayukta bill was toothless and a perfect cover to breed and protect more corruption.

The bill is toothless in booking corruption and has a draconian provision of one year’s jail term or Rs 10 lakh fine for the complainant whose complaint may be labeled frivolous, he said. 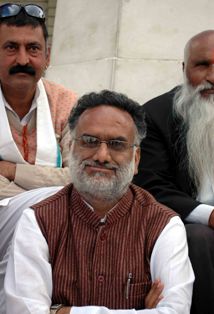 It would only create a fear psychosis and deter the complainant from registering his complaint, he added.

Expanding the Lokayukta bench to have two more Uplokayutkas is only a step in rendering to paralyze the institution even before it is set up, said Sushant.

With the Lokayukta not having powers to prosecute the chief minister, minister, legislators or senior officials and the powers of providing the investigation team being retained with state authorities, what kind of powers would he have, the MP questioned?

Where Karnataka and Uttarakhand have given more teeth to Lokayukta, the proposed Himachal bill only aims to provide legitimate protection to the corrupt, he said.