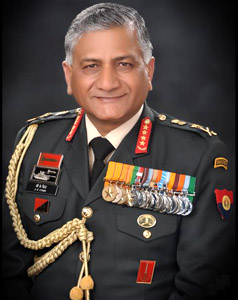 Kathmandu: Indian Army chief Gen. V.K. Singh Thursday dismissed as “absolutely stupid” a report that suggested a coup bid on the basis of movement of two key army units towards the capital”.

The comments come a day after the Indian government led by Prime Minister Manmohan Singh and the defence minister thrashed the report as alarmist as well as baseless.

Singh, here on a two-day visit to attend a seminar hosted by the Nepalese army, said the report was “deplorable” and that some people were trying to throw muck at the government and the army.

“This is absolutely stupid,” was his reply when asked to comment on the Indian Express report of Wednesday claiming the Raisina Hills, the seat of the Indian government, was “spooked” Jan 16 after the troop movement.

“Whosoever is trying to make stories against the army chief is deplorable. What it shows is that people are unnecessarily trying to throw muck at both the government and the army. Such people should be taken to task,” he said.

The Express said the Hisar-based Mechanised Infantry unit and elements from the airborne 50 Para Brigade in Agra moved towards the capital on the night of Jan 16, without following the standard operating procedure of informing the defence ministry in advance.

The report said since this happened when Gen. Singh was waging a judicial battle against the government over his age row, it created unease and suspicion in Delhi. But the paper left it short of calling it a coup bid.

“It (the report) seems like somebody’s mischief,” Singh said, adding that he “can’t keep guessing” who was playing mischief or why it was being played.