Dehradun : Following the widespread damage being caused by wild elephants in this small mountain state and the number of people who have been tramples and the roads coming to a stop with pachyderms blocking the highways, the Uttarakhand forest department has finally woken up to the reality of ensuring that the forest corridors are not allotted for developmental and other purposes. 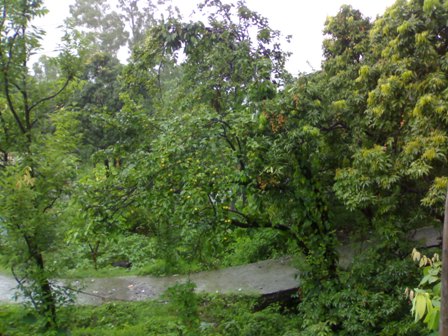 The army wants to create a large structure near the Nepal border, for which it had approached the centre for about 700 acres of land bordering the forests in Haldwani district of Uttarakhand.

However, the forest department told the centre in clear words that the tract is precious saal forest that is declining in the state and is also used by the pachyderms as a corridor for migration purposes.

The army authorities have now asked for another 700 acre tract in Chini block, which is also part of the forest, but the state orest department has also refused to part with this stretch of land on the plea that it is very sensitive as far as the flora and fauna of the region is considered.

It has been further claimed that should this land be given it will have a negative impact on the biosphere of the region.

However, wild life enthusiasts feel that the state forest authorities are waking up to the issue after immense damage has already been done to the forests of the state.

Huge developmental projects like the IPPL at Rishikesh, the army structures and ranges at Raiwala, the irrigation canals in and around Hardwar and industrial plots in Kotdwara and Hardwar to name a few, have already decimated most of the corridors that the wildlife used for migration.

Meanwhile the forest authorities claim that as Uttarakhand was earlier a part of Uttar Pradesh, most of the decision to allot forest land for development and other purposes was taken by the Uttar Pradesh government.