Dehradun : B.C. Khanduri may be putting up a bold face and accepting his defeat from the Kotdwara assembly segment, as a verdict of the people, but the fact of the matter remains that the Uttarakhand chief minister chose a wrong seat to contest from, which made it that much easier for his bete noire, Ramesh Pokhriyal Nishank, to out his guiles into play. 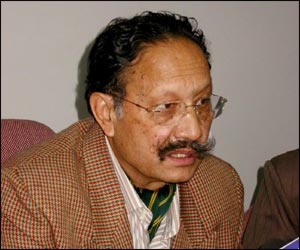 While Khanduri has gone on record to say that as he was campaigning in the entire state for the BJP, which hardly left him time to campaign for himself from Kotdwara, that resulted in his going down to the Congress candidate, S S Negi, but the chief minister should have known that the moment he decided to contest from Kotdwara, he had made it that much easier for Nishank’s game plan.

But to accommodate Khanduri, the BJP denied ticket to its sitting MLA from Kotdwara, Shailendra Rawat, who happens to be a thakur.

If party sources are to be believed, Nishank is said to have thought of his game plan to some ensure the loss of Khanduri, immediately after the tickets were announced.

The fact that Rawat happened to belong to his lobby when he was chief minister, helped Nishank to implement his game plan successfully. Word was immediately spread out that Khanduri had sacrificed a thakur for selecting a safe seat.

This spread like wild fire in the Kotdwara assembly segment and there was a polarization of the thakurs against Khanduri.

Even the BJP loyalists in the community started baying for Khanduri’s blood, which was evident from the fact that in over 90 per cent of the polling booths it was the Congress candidate who took the lead.

It was just in a handful of polling booths only that Khanduri managed to take the lead and that too by a very small margin.

Party sources claimed that the reason for Khanduri picking on Kotdwara was the fact that it comes within the Pauri Lok Sabha segment, that he had represented and also it contains a large number of serving and ex-servicemen.

But the thakur-brahmin divide that Nishank and company were reportedly able to create in the run up to the elections, was far too much to take stock of the situation.

They said that if Khanduri had picked any other assembly segment from Dehra Dun itself, where there is a mix of all communities, he would have won hands down.

But apparently he did not foresee the trump card that his bete noire was able to play in the run up to the elections, that has left him depressed, if not totally dejected.