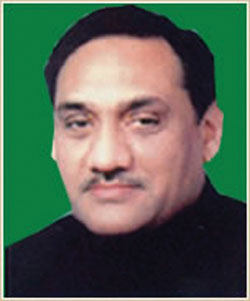 Though initially counted as a contenders for the post of chief minister, Vijay Bahuguna, a Lok Sabha member from Tehri, had gradually shifted into the back ground and it has come as a surprise to political observers here.

Word doing the round was that his sister, Rita Bahuguna Joshi, who was president of the Uttar Pradesh Congress Congress Committee, where party youth icon Rahul Gandhi did hectic campaigning during the recent elections, played a key role in making Vijay the chief minister.

Initial meetings started at 10 Janpath early this morning and continued till the evening, but there was no unanimous choice.

But at the last minute the party high command floated the name of Vijay Bahuguna on whom consensus was finally reached.

Congress sources here had earlier indicated that the party high command may not settle for a sitting MP as the chief minister.

The reason they cited was that it would mean holding two by-elections, one from the Tehri Lok Sabha seat, which would be vacated by Bahuguna and another vidhan sabha seat from which Bahuguna will have to contest to become a member of the state vidhan sabha.

There were doubts that taking the keen contest in the recently concluded elections, that the party may find it difficult to win both.