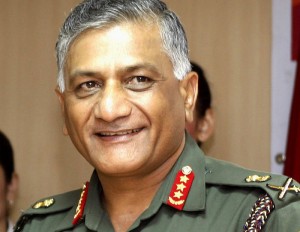 New Delhi : Amid controversy over the alleged bribe offer in purchase of vehicles and his claims of gaps in India’s defence preparedness, army chief Gen. V.K. Singh Friday sounded conciliatory, blaming “rogue elements” for differences with the government even as the Bharatiya Janata Party demanded Defence Minister A.K. Antony’s resignation for “mishandling” the issue.

“Rogue elements are trying to create a schism” between him and the government, Gen. Singh said, a day after he himself called the leaking of his letter to Prime Minister Manmohan Singh on gaps in defence preparedness “high treason” and sought strongest action against the culprits.

Perturbed over the incident, Antony had ordered an Intelligence Bureau probe to get to the root of the leakage of the letter but said all the three defence chiefs “enjoyed the confidence” of the government.

In his latest statement issued to the media, Gen. Singh said: “The army, and by extension the chief of army staff, are a part of the government.”

He also on clarified on raising the issue of graft in the defence deals because a particular retired lieutenant general whom he had chided earlier for offering a bribe of Rs.14 crore for clearing a deal for Tatra trucks had resurfaced earlier in this month.

Earlier in the day, the head of Bharat Earth Movers Ltd (BEML), the public sector company that manufactures the trucks under license, hit out at the army for targeting the vehicle.

BEML chairman and managing director V.R.S. Natarajan said he felt “very sad” that the vehicle is being targeted despite being one on which the army’s strategic assets move.

Addressing a press conference at the defence exposition here, he said he had during the 10 years at the helm of the defence public sector undertaking (DPSU) not received “even a single complaint” against Tatra trucks from the army.

Natarajan’s comments came as Antony Friday said he had acted on complaints against BEML a day after receiving complaints of irregularities forwarded to him on behalf of Congress president Sonia Gandhi in October 2009.

The defence minister’s assertion came on the day media reports suggested that Antony had not acted on the complaints from Dr. D. Hanumanthappa, president of the Karnataka wing of All India Federation of SC/ST/Backward Classes and Minority Employees Welfare Association, who wrote to Gandhi.

The letter was forwarded by senior Congress leader Ghulam Nabi Azad to Antony on behalf of Gandhi, the reports suggested.

However, defence ministry spokesperson Sitanshu Kar said that a day after receiving the letter from Azad on Oct 5, 2009, Antony had asked then secretary defence production to look into the various issues raised in the complaint.

“Records show that the vigilance wings of defence ministry and BEML are examining the matter and there are also correspondence between the Central Bureau of Investigation and Chief Vigilance Officer of BEML on these allegations,” Kar said on behalf of Antony.

“Meanwhile, the defence minister has accorded his sanction for a CBI investigation on Feb 21, 2012 in another case relating to BEML, much before a newspaper report was published on Mar 26,” he said, but did not provide details of the complaints in this regard.

Upping pressure on the government, the BJP demanded Antony’s resignation.

“If the probe in Tatra trucks is continuing from 2009 to 2011, if it is not completed in two years, then this government and this defence minister are trying to cover up corruption,” BJP leader Prakash Javadekar (BJP) said in the Rajya Sabha while raising the issue during question hour.

The Congress hit back, accusing it of trying to create instability.

“This demand shows the distorted and perverse extremes to which the BJP can go to create instability and sensationalism,” Congress spokesperson Abhishek Manu Singhvi said.
IANS