Patiala (Punjab): A fortnight after she was sworn in as cabinet minister, senior Punjab minister Jagir Kaur was today arrested and sent to jail after a court held her guilty of criminal conspiracy in the mysterious death of her daughter in April 2000. However, the court dropped murder charges against her. 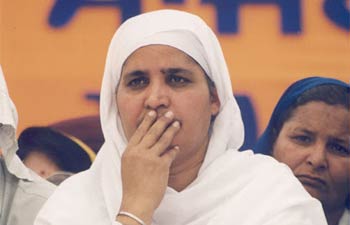 However, the court cleared her of murder charges framed by the Central Bureau of Investigation (CBI).

Meanwhile, Jagir Kaur resigned from the Parkash Singh Badal government today evening after her conviction and arrest. She was the lone woman minister in the Badal government.

The incident has caused immense embarrassment to the Badal government, which came back to power after the recently held assembly elections.

Jagir Kaur was arrested immediately after the sentencing and sent to Patiala Central Jail along with other accused. The special CBI court in Patiala, 80 km from state capital Chandigarh, also imposed a fine of Rs.5,000 on her.

Jagir Kaur is a former president of the Shiromani Gurdwara Parbandhak Committee (SGPC), the mini-parliament of Sikh religious affairs. She had remained SGPC president twice in 1999-2000 and in 2004.

She has been held guilty under various sections of the Indian Penal Code — Section 120-B (conspiracy), 313 (causing miscarriage without woman’s consent), 344 (wrongful confinement for 10 days or more) and 365 (kidnapping or abducting with intent of secretly and wrongfully to confine person).

However, the court dropped the charges of murder (Section 302) against Jagir Kaur and others who had been accused by the CBI.

Three others – Dalwinder Kaur Dhesi, Paramjit Singh, both of whom had facilitated Harpreet’s forced abortion, and Nishan Singh, a Punjab Police officer – have also been absolved of murder charges but convicted for conspiracy and other charges. Two others, Harminder Singh and Satya Devi, were absolved by the court of all charges.

Another accused, Sanjeev Kumar, who has since died, was also absolved of all charges.

Jagir Kaur’s daughter Harpreet Kaur had died under mysterious circumstances April 20, 2000, following which she was cremated hastily by the family members. There was no post-mortem conducted. The Badal government was in power at that time as well.

Harpreet had angered her mother and other family members by secretly marrying a youth, Kamaljit Singh, who belonged to a lower caste. Kamaljit belonged to Begowal village in Kapurthala district where Jagir Kaur heads a cash-rich Dera (sect).

The CBI had registered an FIR in the case in 2000 following orders of the Punjab and Haryana High Court. Kamaljit had approached the high court saying that his wife Harpreet had been murdered.

He alleged that Harpreet, who was six months pregnant at the time of her death, was murdered at the behest of her mother at Phagwara, an industrial town 20 km from Jalandhar.

In its chargesheet to the court, the CBI had stated that Dalwinder mixed poison in Harpreet’s food. The CBI had claimed that Jagir Kaur had sought the help of a doctor to suggest the poison to kill her daughter.

Jagir Kaur, who is a powerful politician in Punjab and considered close to the chief minister, was inducted as a cabinet minister March 14. Being a former SGPC chief, she has a sizeable hold over Sikh religious affairs also.