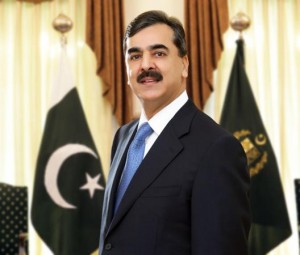 Islamabad : Yousuf Raza Gilani was Monday indicted by the Supreme Court in a contempt of court case for refusing to reopen corruption cases against President Asif Ali Zardari, making it a first for any prime minister in Pakistan.

The prime minister waved before entering the court where head of the seven-member bench of the apex court, Justice Nasir-ul-Mulk, read out the charge sheet in Gilani’s presence.

He asked the prime minister to stand up and hear the charges out against him, reported Xinhua.

The judge asked the prime minister if he has read the charge sheet, Gilani replied “yes”.

“Have you understood contents of the charge sheet,” the judge asked.

“Yes, I have read it,” the prime minister replied.

All the seven judges signed the charge sheet before it was read out in the jam-packed courtroom.

Attorney General Maulvi Anwarul Haq was asked by the court to act as the prosecutor.

Gilani’s counsel Aitzaz Ahsan sought time till Feb 24 for submission of reply as he was going out of the country, reported Geo News.

The case was adjourned till Feb 22; evidence by Gilani will be recorded Feb 27 and 28.

If convicted, Gilani could go to jail for six months and lose office.

There was tight security as the prime minister reached the court premises. The court had issued him a contempt notice Jan 16.

Gilani had appeared before the Supreme Court Jan 19 in the contempt case for not acting against Zardari for corruption and defended his move, saying that the constitution provided immunity to the president.

Gilani had then said he had spent six years in prison and had never been reluctant to appear before the court. This indicated that he had always respected the court.

The apex court had warned the government of action if its ruling on the National Reconciliation Ordinance (NRO), granting immunity to politicians and bureaucrats in corruption cases, was not implemented by Jan 10, 2012.

The court had also sought reopening of cases closed under the NRO, struck down as void in 2009. It had ordered the government to write a letter to the Swiss authorities to reopen cases against the president.

Zardari, accused of graft, had been granted amnesty under the NRO which was issued in 2007 by then president Pervez Musharraf to facilitate the return of former prime minister Benazir Bhutto and her husband Zardari.

The National Accountability Bureau (NAB) had in 1998 accused Zardari and the late Benazir Bhutto of awarding a pre-shipment inspection contract to the Societe Generale Surveillance (SGS). This was done in return for six percent commission on the total amount the company received from the Pakistan government, it claimed.

Earlier in August 2008, Swiss judicial authorities, acting on the request of the Pakistani government, had closed a money laundering case against Zardari and released $60 million frozen in Swiss accounts.
IANS