Los Angeles : Meryl Streep, who won the best actress BAFTA for her performance in “The Iron Lady”, says she instantly said yes for the movie on former British prime minister Margaret Thatcher because there aren’t many filmmakers who are interested in what it means to be a woman leader.

“To think about the barriers that Margaret Thatcher broke through to become the leader of the United Kingdom was to put yourself in the head of a woman in the late 1970s, when she really emerged as the leader of her party. It was interesting to follow someone who happened to be a woman solving big world problems, in a way that women were not expected to do in that time,” said the 62-year-old.

“I’ve watched women directors struggle with trying to be the commander. And women leaders too. We’re not quite comfortable yet with this idea. Margaret Thatcher really did break ground in that she showed a way in which a woman could be a leader,” said the multiple-award winning actress. She has received two oscars and eight Golden Globes.

She describes the first day on the sets of “The Iron Lady” like entering boys club and she compares the feel with Thatcher’s survival in the men’s world.

“For me as an actor, just walking into the first day of rehearsal was incredibly daunting because there were all these wonderful British actors and I was the only woman in the room and I sort of had the feeling Margaret Thatcher must have had when she walked into the Conservative Party meetings.”

“The days that we were shooting in Parliament, or we were re-creating Parliament, were very interesting because how one dominates a room, how one pulls a listening audience in to persuade them of some matter of policy is something that we still struggle with as human beings,” she said. 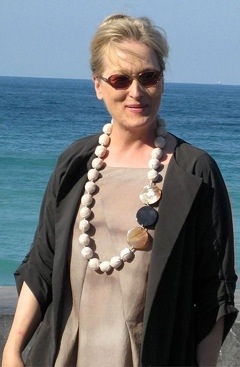 Streep is known for her powerful performances in “Sophie’s Choice”, “Silkwood”, “Falling in Love” and “Devil Wears Prada”.

Asked what the best part about making “The Iron Lady” was, she said that the film provided an opportunity to look at a whole life.

“Because at this point in my life, you know, you do look back and you think about the whole history,” she said.

“And then you also realize that what is important is the day, this moment now… And you could argue that really the only important thing is to be in your life and in the exact moment in which you find yourself, and it’s the hardest thing in the world. It’s, you know, the Zen of it all, to really live where you are; feel it, be in it.

“We all say, when we are young, what we’re never going to do. But we all live in the same book…You know, we all begin and end. It’s an unusual ambition to aim a whole movie to that moment, the end; usually, you aim at the apogee, you aim up. And we are looking at the distillation of what it means to have a gigantic, big, full life and then to watch it subside. I mean, it’s a poem, right?”
IANS