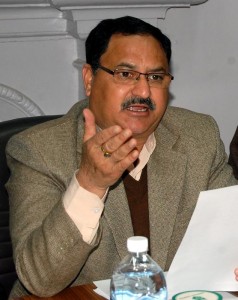 Shimla : The P.K.Dhumal led BJP government in Himachal Pradesh may have got a blanket clean chit from the party high commandâ€™s review team of J.P.Nadda and Shyam Jaju , but the entire exercise now appears to be like an eye wash to many .

Not only the Himachal Lokhit Party(HLP) but even independent observers say Nadda and Jaju were the safest bet for Nitin Gadkari and Dhumal to maintain status quo in the state leadership ahead of the crucial assembly polls later this year .

But the blanket clean chit has surprised many observers as it has come despite the serious charges of corruption and illegal land deals slapped on Dhumal and his core team by his detractors .

Even before Nadda had begun the probe many already suspected which way his verdict would go .

He has never shown signs of a challenger in the past even though this was his chance to emerge as a leader of much promise which he showed in his early career .

So the message is that Nadda wants for the moment to keep away from state politics . And many say he would be happy to be nominated by Dhumal to the Rajya Sabha in the next few weeks .

If Dhumal loses power in the upcoming next elections later this year , Nadda can then set his eyes at the top post five year later , maybe . But if Dhumal wins the polls Naddaâ€™s chance may never come again .

The political events this week now indicate Nadda does not fancy challenging Dhumalâ€™s leadership even though Dhumal appears to be at his weakest since he took over power over four years ago.

But Nadda has gone a step further by emphatically endorsing that the next election will be fought under Dhumalâ€™s leadership, this has surprised many , some have even accused him of being meek .

Nadda followers are disappointed as they believe this was the time to strike at Dhumal and emerge as his challenger , some even say the next chance may not come easily for a long time now in the uncertain world of politics !