Jalandhar: Motorists and commuters here in the city and elsewhere were a harassed lot, yesterday, as farmers dumped tons of potatoes onto roads in protest of the low prices the vegetable was fetching in the markets. 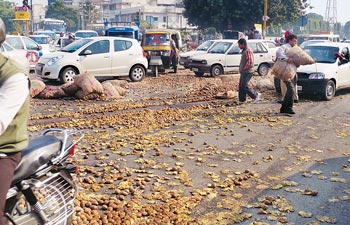 Having announced their intentions early, the farmers were only able to get 30 tractor trolleys past police barricades in the city and managed to thrown them onto the city roads. The protesters had lined up more than 300 tractors for dumping purposes.

Traffic on the GT Road near Guru Nanak Mission Chowk and Nakodar-Shahkot was badly hit because of the potatoes lying on the driving lanes.

Elsewhere, in Mohali town, potato growers dumped their produce on the road.

High profile BJP MP from Amritsar, Navjot Singh Sidhu was one of the several VIPâ€™s caught in the potato traffic jam.

Punjab potato growers are protesting the glut in the market as prices have crashed to a level where it is being sold at Rs.1 to Rs.1.50 per kg.

With over 40 lakh gunny bags from last year lying in cold storages across Punjab, a new bumper crop has added to their woes.