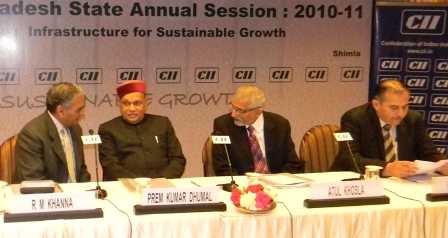 Shimla: With industrial growth facing constraints, Confederation of Indian Industry (CII) asked the Himachal Pradesh government to give priority to infrastructure so as to consolidate the gains obtained in attracting new industry till expiry of the central excise package.

Industrialists from all over the state, who had gathered here on Saturday for the CII state annual session, were interacting with chief minister Prem Kumar Dhumal.

Making a detailed presentation, Malhotra pointed out the various infrastructure requirements for the sector, while mentioning other concerns of the industry.

Atul Khosla, chairman CII Himachal state council asked for steping up marketing and branding of the state about competitive advantages for attracting investments like Gujarat had done.

R M Khanna, chairman, CII northern region assured of chambers support to the government for extension of railway network in the state.

Chief minister Dhumal said both the state government and the industry needed to join hands for promoting industry and meeting the infrastructure needs of the state.