Shimla: A landslide in having washed away a portion of intake water channel for a 5 MW mini-hydropower generation plant has caused much devastation to farmlands and two villages in Chamba district, with the management putting the losses at about Rs 12 crores.

SK Singh, general manager of Ginni Global Hydel project has been quoted in a section of the media that â€œthe loss is estimated to be anywhere between Rs 10 to 12 crore.â€ 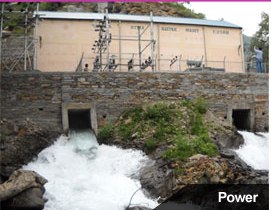 A consultant team from Delhi has been requisitioned to assess the loss as well for developing a repairing plan for the damaged channel, he added.

Before the inflow into the channel could be shutdown, the gushing water from the broken point are said to have severely damaged farmlands and did threaten the neighboring villages of Kuprot and Janvas in the area.

Chamba Deputy Commissioner Devesh Kumar, when contacted by My Himachal News said the damage to private property was yet to be assessed. â€œNo loss of life has taken place,â€ he said.

Management of the Taraila plant informed me that the intake structure of the project had been damaged, he added. Over last week the region experienced incessant rain, said Kumar.

The Delhi based Ginni Global Private Limited commissioned the 5 MW small hydro power Taraila station in November 2007 and is in the advanced stage of executing the 5 MW Balseo small hydropower station in the same region of Chamba.

Ginni Global is an independent power producer, engaged in the production of renewable and non-renewable energy. Besides, the company also operates a 6 MW furnace oil based plant in Rajasthan.