Dehra Dun: Caught between the falling graph of the Nishank government in Uttarakhand as it continues to be mired in alleged controversies of scams and charges of corruption and dissidence in its rank and files as the elections to the vidhan sabha are due in March next year, the BJP central leadership is in a catch â€“ 22 situation.

The issue is whether it should replace Nishank as the chief minister to stem the rot, and if it does whether the new man will be able to deliver the goods in jyst six months and lift the sagging image of the party. 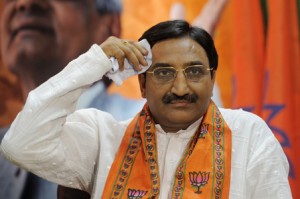 Party national president Gadkari has summoned Nishank to Delhi on Saturday, even as some of the prominent detractors of the chief minister, including former chief ministers Maj Gen (retd) Bhuvan Chand Khanduri and Bhagat Singh Koshiyari are camped in the capital, to have a one-to-one on the allegations of corruption and non-functioning of the BJP government in Uttarakhand.

The buzz words is that Nishank mat be asked to hand over his resignation as chief minister on Sept 10 and the legislature party asked to elect a new leader. Shouls this happen the present front runner is Maj Gen Khanduri, who of late had come out openly against the prevalent corruption in the state, without naming the chief minister.

In fact, the tirade against Nishank was taken up by another ex-army man Lt Gen T P S Rawat, a former Congressman, who quit the party to accommodate Khanduri.

When Khanduri was sworn in as chief minister of the state, Rawat quit his Pauri assembly seat for Khanduri to contest. Rawat later also joined the BKP and won the Pauri Lok Sabha parliamentary seat, which was held by Khanduri.

Rawat quit the BJP recently raising charges of corruption against Nishank and also formed the Uttarakhand Raksha Morcha to enlist the support of the ex-servicemen and serving personnel and the families ion the fight against the prevalent corruption in the state.

After Rawat had undertaken a whirl wind tour of the state, holding meetings under the banner of his Uttarakhand Raksha Morcha, jitters could be felt in the BJP camp here.

Though Khanduri did not come out openly against the chief minister or the BJP for that matter, he too started holding meetings targeting the malaise of corruption which has become very deep rooted in the state.

Sensing that the duo could send a wrong message to the population of serving and ex-servicemen, which is largest in Uttarakhand as compared to the other states of the country, which could ring the death knell of the party in the forthcoming assembly elections, forced the party to review the situation in the state at the national level.

Incidentally, the short tenure of just about two years of the Nishank government has been mired in a number of allegations of corruption and scams. Notable amongst them has been the Kumbh Mela scam, the disaster mitigation scam, hydro-electric projects scam and the the Sturdia scam in which the land use of the company was changed from the patwari to the chief minister level reportedly in a day.

The all important question that a section of the partymen here seem to be asking is, whether the change in leadership at the last minute could bring about the desired results.

The last time it was done, when Nitya Nand Swami was re3placed by Bhagat Singh Koshiari about four months before the 2002 Feburary elections had proved disastrous for the BJP.