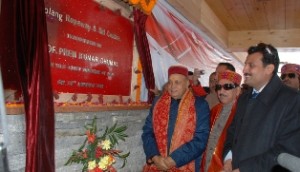 : Giving a fillip to winter sports in the state, chief minister Prem Kumar Dhumal today inaugurated a Rs 36 Cr. ski center with a ropeway at Solang Valley in Manali.

Set up in a Private-Public-Partnership (PPP) mode with the terms of Build-Operate-Transfer (BOT) basis by a Ski-Himalayas Ropeway, a private sector company, the new facility will transport the skiers higher uphill on Mount Phatru, providing a longer downhill run for the skiers.

Speaking to a large gathering at the venue, Dhumal said that the new facility would substantially give boost tourism in valley that was endowed with much natural beauty.

Touching upon the success in containing polythene litter, the chief minister while mentioning about the appreciation that the efforts had got from all quarters said, â€˜the government would get tough against offenders.â€™

Residents and tourists needs to be sensitive to the environment and plastic waste could be safely recycled and used by public works department for road building purposes, he said.

Amitabh Sharma, MD of Ski Himalayas Ropeways on the occasion assured the gathering about the safety standards adopted in the ropeway project.