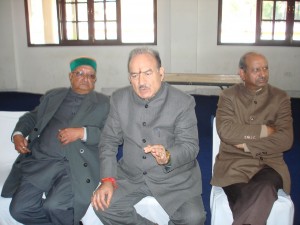 Addressing a press conference here this afternoon Kaul Singh said that all district units of the congress party were being asked to send the feedback pertaining irregularities to irregularities and illegal acts of the ministers and MLAs of ruling party to the congress headquarter with documentary evidence so that same could be incorporated in the charge sheet. Thakur said he had already number documents in hand pertaining to benami land deals, existence of â€œBhu Mafiaâ€ in the state , out of turn benefits given to selected contractors in PWD and IPH and sale of land to outsiders in gross violation of rules. All these facts would form part of the charge sheet.

In reply to a question Thakur Kaul Singh said in first round of panchyats elections congress had captured posts of presidents and vice presidents in seventy percent panchyats. He said panchyats and municipal elections being held in the state was referendum on the performance of in three years tenure of Prem Kumar Dhumal government in office. It was evident from the results that in first phase of elections people of the state had out rightly rejected the BJP government and its anti people policies.

Kaul Singh said deteriorating law and order situation in the state had become a matter of concern. There have been increase in the cases of murder, thefts and dacoity. In most of the case police had failed to trace the culprits. In many parts of the state people had stopped venturing out side after sun set. He quoted that over one hundred vehicles were stolen from the different parts of the state in past one year, police was yet to arrest the culprits.