Shimla: At draw of three years in office in his second term, chief minister Prem Kumar Dhumal listed out the marked shift to improving agriculture-horticulture productivity, empowering women, containing corruption, setting up many professional educational institutes and other initiatives that the government had delivered on.

Holding that maintaining the pace of development and ensuring financial resources as the challenges that lay ahead the chief minister said that by marking about 12% of the budget for agriculture, which was one of the highest in the country, the government had drawn up a number of projects for boosting farm productivity.

Drawing attention to the massive turn out in the ongoing panchayat and urban bodies elections, he said that it was a direct result of empowering women in the power structure as 50% seats in these local bodies had been reserved for women.

Though the Himachal High Court has questioned the state governmentsâ€™ stance on tackling corruption, Dhumal maintained that number of corruption cases registered by his government had markedly gone up, indicating the vigilance being maintained.

In response to a question, Dhumal said that the dispute over sharing of Bhakra Beas Management Board assets was before the Supreme Court as the central government had shown its helplessness in arriving at an out of court settlement. 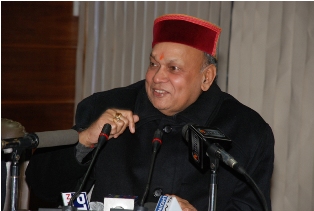 Denying of being vindictive towards former chief minister Virbhadra Singh, who is currently the union steel minister, he said that the audio CD case against him was result of retired bureaucrat SM Katwal having petitioned the High Court in the matter.

The case was registered in May 2007, when Virbhadra, himself was the chief minister, he added.

As Himachal would be completing 40 years of statehood on 25th January, 2011, the government has planned out a series of celebrations to mark the year and the strides in development achieved, for which it was even handed out the state of state awards among the countryâ€™s big states recently, said Dhumal.