Shimla: Snow, rain and sleet kept most tourists and residents across the state indoors as the cold wave intensified over the region with several destinations reporting moderate to heavy snowfall through the night and the day.
Lower hill were pounded by incessant rain, breaking a long dry spell, which has proved a boon to the farming community.

â€œModerate to heavy snow has been reported from Manali, Solang, Keylong, Patseo, Kalpa, Sangla, Udaipur, Narkanda, Kufri and Kharapattar,â€ said met director Manmohan Singh. â€œManali has received about 22 cm of snow whereas Solang has about 15 cm of snow,â€ he said.

â€œWe have received over 15 cms of snow,â€ said Narinder Sharma, over phone from Narkanda. The years skiing seasonâ€™s here will get off to a good start soon,â€ he added.

Kufri (15 Kms from here) by evening had recorded about 15 cms of snow by the evening. Braving cold weather, some tourists did venture out to Kufri to witness a snowfall.

Having spent the day with friends throwing snowballs and sending pictures on a blackberry phone, Anel Sharma, a software engineer from Delhi said, â€œeven though it was bitingly cold, getting to witness a snowfall was worth it all.â€

Those staying put out in hotels close to Shimla at Charabbra, Kufri, Galu and Fagu, the snow cover changed the landscape from brown and green to a white one.

As snow evaded Shimla, many who spent the day indoors because of the wet conditions were a disappointed lot.

Out on a honeymoon, Shweta Mehra complained, â€œhave been looking out for the magic flakes all day long.â€ Sounding optimistic, Sudhir, her husband intervened, â€œthey forecasted snow, we may just be lucky out here.

The Shimla airport authorities reported that flights between Delhi-Shimla-Delhi for Thursday were canceled because of the rainy weather conditions. 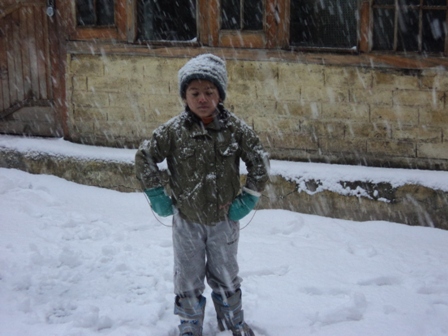 The weatherman has forecast more rain and snow over the next 24 hours before the intensity of the western disturbance over the region tapers off.