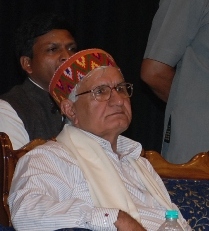 Shimla: Hitting out at the centralization of education sector, BS Dohia, a distinguished educationalist and a former VC of Kurukshetra University said that under the guise of reforms carried out in education over the last two decades, the scenario is chaotic and the regulatory mechanism is in contradiction with the unfolding policy.

Delivering a blunt keynote address at a conclave on education organized by Ashadeep an NGO, Dohia said that statements made in parliament were far removed from the ground realities in higher education in the country.

Citing instances of acute shortages of teaching faculty in existing universities and colleges, the educationist said that statements made about new jobs in teaching likely to be created by proposing to set new universities was only selling dreams without acknowledging the reality around.

Pointing out the opening up of a central university in Haryana, he said, even after a year, this university does not have any land earmarked for setting up a campus, does not have any faculty but a vice-chancellor has been appointed and courses upto the level of M.Phil and PhD courses are being offered.

He said that after doling out such central universities to the states before an election as sops, the central government seems to have all but forgotten about it.

Mentioning the discrimination in funds allocation to institutions directly under the supervision of the union government which included the IITs and IIMs, Dohia said the while 80 % of the central budget for higher education is earmarked for these institutions, state universities in rest of the country only get 20 percent of it.

Alleging that the government over two decades was slowly withdrawing from the welfare state concept, especially in education and health programs, he said under privatization and self financing courses, fee structures had reached a level where many were unable to afford higher education.

University Grants Commission norms were not applied or being enforced upon private institutions, he said, which was leading to exploitation at both ends.

Students were being asked to pay higher fees and the faculty being engaged on contract was both under-qualified and underpaid leading to lowering of overall educational standards, he added.

With education being on the concurrent list, but under the guise of reforms the states powers on the education sector were being usurped by the central government, he said that there was a need to decentralize and ground realities needed to be taken into consideration while framing education policy.