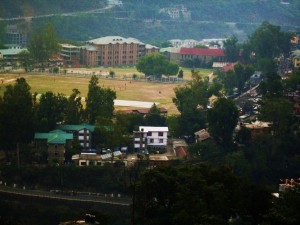 Pic: Transit campus of IIT Mandi where the inaugural session opens up on 9th August, 2010

Shimla: The number of IITs has doubled in the past year. Although mentoring by existing IITs is providing better starts, the newer IITs face big challenges. While the new Directors will immediately be recruiting core groups of faculty and non-teaching staff, and building up campuses, experience of the older IITs shows that poor-quality recruitment based on expediency can have adverse long term consequences. The new IITs must also guard against emulating the complacent academic environments of the older IITs: they must start small, and boldly experiment with new department structures and curricula suited to the rapidly changing environment of this century.

As a start, the new IITs should focus on modern infrastructures: Recruit high-quality people to lead modern computerized accounting and administrative systems, educated non teaching staff for laboratory and workshop support, and implement high speed wireless information technology environments. The campuses should be designed by architects and the layout and long-term growth of the campuses, which are mini cities, should be overseen by high-level people; a PWD mentality just will not do. And the days of peons and typists are clearly over.

The most important ingredients for high quality institutions are student and faculty quality and the academic environment. Fortunately, the students selected through the IIT Joint Entrance Examination are outstanding, much better than anywhere in the world, accounting in large measure for the success of the IIT alumni.

But the IIT faculty do not compare with the best in the world. And, at a time when even the existing IITs are unable to find enough high-quality persons, the very large number of faculty requiredâ€”more than double the existing numberâ€”raises flags: To assure academic excellence a very aggressive, proactive worldwide effort will be required to identify and attract the best and the brightest. And the IIT system as a whole needs a high priority faculty development programme.

Most importantly, the IITs are trapped in twentieth-century thinking. The existing curricula and knowledge delivery systems are not geared for the very rapid obsolescence of current knowledgeâ€”in some areas of technology what is learned in the first year becomes obsolete by the third year. Future technology leadership, the key to economic prosperity, will require well thought out revolutionary changes.

Some background for better understanding these issues: The demand for engineers from the mid-nineteenth century industrial revolution resulted in different models for engineering education in Europe and the UK. In the beginning of the twentieth century India adopted the practice based UK model built around the design, performance, and manufacturing of machines. This was not an impediment so long as technology changed relatively slowly, as it did in the first half of the twentieth century. In India it was not uncommon for students to be taught the same things, in the same way, and from the same notes that had been used for their fathers. But in the West evolutionary curricular changes reflected the rapid technological advances made during the Second World War.

In the USA, the space race spawned by the 1957 launch of the Sputnik resulted in massive investments in science, technology and education. A major outcome was the switch in most Western institutions to engineering science, which emphasizes fundamentals rather than engineering practice. However, internal resistance prevented a complete changeover to the new paradigm.

IIT Kanpur was the first institution in the world to implement a totally new engineering science oriented curriculum based on the model proposed by the American Society of Engineering Education. A conscious effort was made to not invest in heavy equipment oriented laboratories, which do not contribute much to the education process, but tend to act as mill-stones as the technology environment moves on. Over the past 50 years, this revolutionary change catalysed the modernisation of the archaic Indian technical curricula, including those of the other IITs.

But this model has not kept up with the realities of the rapid changes taking place; we need another revolution in curricula and knowledge delivery systems that accounts for the highly processed, user-friendly knowledge available on the World Wide Web. And we need to rethink how faculty will â€œteachâ€ students in this new information-technology enabled environment.

Some curricular changes were forced by the Government when it required the IITs to shift from the five-year to a four-year degree format. Internal curriculum review committees usually have produced limited outcomes; academic institutions are notorious for resisting change. What is needed, at least once every decade, is an absolutely fresh look at curricula from scratch: evaluate the current technological environment, try to assess future technology trends, and then design new curricula for that future environment.

The new IITs offer eight opportunities for developing novel curricula for this century. Hopefully, they will be encouraged to experiment with new models for department types and structures, and new curricula to address the rapidly developing technologies and knowledge delivery environments. India no longer needs collaboration with foreign institutions to conduct such experiments. Rather, it needs the will to define the challenges, develop several options, and boldly execute them. Surely, this will shake up our technical institutions and drag them into this new century.

The writer is a former professor, IIT Kanpur.

A draft of this article appeared in the November 16, 2009, Lucknow City Edition of The Times of India. It is a sequel to an earlier article available at Times of India